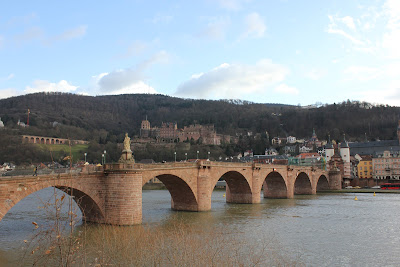 The Old Bridge with Heidelberg Castle in the background

Friday: We slept in until about 0800 and then ate breakfast. We wanted to make sure that we got out a little this weekend because we haven't left this post since New Years Eve together. Unfortunately the day started off with rain, so we quickly made our way to the joint Burger King/Anthony's Pizza establishment next to the gate. We had some pizza which I don't think we'll be doing again. Eight dollars and change is a little too much for a meal deal that doesn't really even fill you up. Luckily by the time we finished lunch the rain had stopped. I promptly called a taxi and we headed outside the post.

Taxis are not allowed on post, so when one is called we have to walk outside the gate and make our way about a quarter mile down the road to where they will pick us up. We headed down to Bismarckplatz, which is a central hub in downtown Heidelberg. It's connected to Hauptstrasse which is a main street filled with a number of stores along the way. It's pretty much an outdoor shopping mall on old cobblestone streets. We made our way down looking at stores, looking at people, and sipping on a Starbucks coffee.

The architecture is what you see in all the German postcards and such. We made our way to the old bridge over the Neckar River. The stone bridge in this location was first constructed in 1786, but like many bridges in Germany it was destroyed during World War II. It has since been reconstructed and retains the old look and feel. Looking up from the old bridge you can see Heidelberg Castle.

After taking some pictures we made our way to the castle. Unsure of how to get there we just headed towards it until we saw signs. There was a walkway that we took instead of the cable car. The castle is very impressive and was fun to check out. The courtyard and everything around the castle is free, but you have to pay 5 Euros for admission to get inside. Once inside we were impressed, but also a little disappointed at how little we were able to see. There is a Keg room containing "Das Grosse Fass" The Big Keg, which is amazingly huge. There is also some great views of the city below. They do offer guided tours which allow you to see even more of the castle, which I think we will definitely do next time we visit. This time we just wanted to do the basics and check everything out.

We headed back and then caught a taxi back to PHV. Once back at our place we both realized how tired we were. We did a lot of walking around and both felt exhausted. Until we get our car this isn't a trip we'll be able to do too often. Round trip the taxi cost a little over 30 Euro which is close to $40. We have to keep that in mind anytime we want to venture out.

I think I mentioned earlier, but I'll mention it once again. I'll be posting pictures on this blog every once in a while, but I'll also be placing the majority of my Germany Experience on the Flickr site I made. (Edit: since Flickr is now limiting the number of photos that can be uploaded without a paid membership, I've begun moving them to Google Photos and deleting them from my Flickr account)

Saturday: Today was truly a lazy day. We both didn't do much of anything except play around on the Internet or watch TV shows on my computer. Honestly I can't even write anything more because not much else happened!

Sunday: We didn't do a whole lot today either, except jog to The Strong Hold to get a work out and then jog back. I took it easy on the workout because I'm so out of shape and I know I'll be going back to normal PT pretty soon. I don't want to die when I start doing company PT, but I don't want to be too sore either. I'm trying to balance and ease my way back into shape.

The only other exciting thing we did was make a trip to the commissary. We make frequent trips because we don't have a car and we only grab what we can hand carry back to our place. It has been such a blessing having a kitchen and having my wife. Even though we don't have much as far as kitchen supplies go, she does an amazing job of making us meals. For a year in Korea, if I wasn't eating out, I was eating in my room from microwavable food. That can get pretty boring after a while, and I cherish every bite I get now.

Monday: Monday was an almost exact carbon copy of Sunday. We have the day off for Martin Luther King. We worked out and then watched TV shows. I watched UFC 142, which had some awesome knockouts. I also ate some more great home cooked meals!

I contacted my sponsor and found out he had staff duty tonight, so he will not be picking me up tomorrow. Instead I'll have one of the sergeants from the office picking me up, but the good news is that it will be a little after 0900, so I'll keep the same schedule I've been on since I've been here. No PT in the morning…yet. Not exactly sure what I'll be doing tomorrow…I guess we'll see.