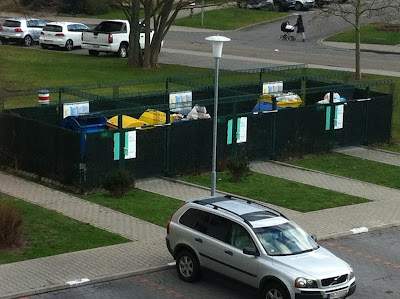 The trash and recycling stations for each of the stairwell units

Saturday: Today we had thought about venturing out and exploring the city of Heidelberg, but the weather changed our minds. It was raining and pretty much a miserable dreary day outside. This naturally kept us inside our new place with my little laptop as our entertainment system. It's strange living with just the bare essentials. We have whatever we could pack in our two suitcases and the few things we picked up at the recycle center as far as dishes and cookware go. We also have the loaner furniture which I'm grateful for. There is a place called The Lending Closet which has quite a bit of stuff we can take out on loan, but the problem is that it's located at another part of the post (the shopping center). My wife was making chili for lunch and went to open a can of beans only to realize that we don't have a can opener…d'oh! I had to walk to the commissary and purchase one. It will be nice once all our stuff arrives.

Since we were staying inside we decided on watching Sons of Anarchy. I have all the seasons on my computer and we sat down and completed the first season, then made a dent in the second. It's a great series about the daily lives of folks in a motorcycle club.

The only other major event happened when there was a knock on our door. Strange…we don't know anyone yet that lives here. I opened it to find who I'm going to call the recycling Nazi. He announced himself as the supreme stairwell floor commander...or something to that affect. He said he found a number of recyclable items in the trash. We learned at in-processing that Germany takes recycling to the extreme. We had been separating the usual suspects such as plastic bottles. We also had a large bag from our recent trip to the PX and it had a few things in it that are supposed to be separated, such as Styrofoam. Each stairwell of the housing have six units in them. Each of these stairwells also have a designated trash/recycling area. In order to throw anything away or recycle, you have to take your house key and use it to gain access. Needless to say we are going to have to do a better job of separating our recyclable items.

Sunday: Today the weather was a little better, but we decided not to travel outside of the post because there is not much open on Sundays in Germany. Instead we did the usual…watched some TV shows. We decided to get out for a bit and take a walk around PHV. The post is not that big as we found out during our walk. When we first arrived, I was a little disoriented and had no clue how to get anywhere. It was nice to get out for a bit and walk around, it's the only exercise I've been able to get since arriving here. We were not quite sure exactly what was available on PHV until recently. PHV as I noted earlier has a commissary, a movie theatre, a library, schools (elementary & middle), a restaurant, a shoppette, a bowling alley and a youth center. There isn't too much else besides housing. I originally thought there was a PX here as well, but unfortunately I was mistaken. For everything else we have to travel to the various other posts that are scattered around town.

Wondering how I was going to get to the central processing tomorrow, I emailed my sponsor. He has to teach a security+ class all week next week, so I knew he would not be able to pick me up. I received a call later from a sergeant in our battalion. He asked if I'd been to a PT formation yet…no. Do I have all my winter PT clothes…yes. Then he asks if my sponsor was the only way I got to and from in-processing last week…yes. A long pause…then he states that he thinks he'll just give me some time with my wife in the morning and call sometime tomorrow to let me know who is going to pick me up. So I guess I'll wait and see.

The rest of the night we video chatted with family and watched some more shows…a pretty laid back weekend.