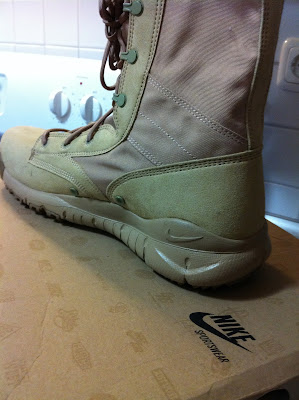 Got my Nike Combat Boots in the mail today. They are amazingly light and I've only heard great things about them. Looking forward to wearing them tomorrow!!

This morning I had company PT at 0630, unfortunately I had a horrible nights sleep. I don't know why, I guess because I was a little nervous about my first day of company PT. I tossed and turned all night long watching my remaining window of sleep time get smaller and smaller.

A co-worker that lives in the building next to me picked me up and took me to the formation which was actually on Campbell Barracks, where I work as well. The co-worker (SPC Matrix) picked me up about 0600 in front of my barracks in civilian PT clothes because we were going to run off post. With everything that can happen while in a foreign country it's best not to draw attention to yourself off post…like being in uniform.

It was in the mid 20's, I was so cold standing in the formation, I was starting to shake. I had on sweats and and long sleeved shirt with a pullover on top. We finally started the stretching and warm up exercises before being turned loose on our run. We paired up with another person and took off, my boss paired up with me. I made the 4 mile run without stopping, but I can tell you that my legs felt like they had lead in them. I'm still very much out of shape and it's going to be a painful process getting back.

After the run SPC Matrix dropped me off at my place around 0730 and said he'd pick me up again at 0830 for work. My wife had already woke up and had the coffee ready along with breakfast…I love her!

The work day was very similar to yesterday…I sat in a chair and looked at the wall while occasionally looking at the clock. Every once in a while I would engage in small talk with my co-workers. I would also go out for smoke breaks occasionally even though I don't smoke, it just gave me an excuse to get up and walk outside to chat with the guys. Until I get a security memo signed, I cannot get the code to get inside the office or go into "The Vault". This basically means I can't do much except sit there, so that's what I do…and I try and do a good job. I tried out three different chairs throughout the day in various spots. What an exciting day!

The highlight of my day came at noon when we had to go to a required EO Sensing session. My group was for E-4s and below. It was basically a place where people could raise general concerns about the work environment. Are people treated fairly? Do you like to come to work? How are your superiors? Questions like these came up and there were a number of people complaining that the higher ranking NCOs don't get punished the same as junior enlisted. Take a DUI for instance, if a junior enlisted gets one they get the maximum punishment, where as higher NCOs get a slap on the wrist. Bad leadership was also thrown around. I had nothing to say as I haven't been here long enough. I have other issues about the army in general, but nothing that really pertained to that meeting. Not sure what, if anything will come from it though. I guess we'll see.

My boss gave me a ride home and I spent the evening preparing for tomorrow's PT…a ruck march, which I freakin' hate with a passion! I then spent time with my wife watching our shows and hanging out.