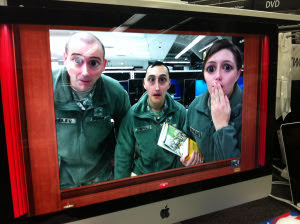 This morning I was picked up by my sponsor at 0820. We headed to the main processing facility once again. The briefings started at 0845 and today's topic was health and wellness. We were briefed on diet and exercise, but unlike the other days which were just "Death By PowerPoint", today we actually all had to get up and be involved. After the brief we had to line up for two stations. The first station measured our body fat percentage and body mass index (BMI). The next station took our blood pressure. We were then briefed about the results…all of mine fell within the normal category, so I guess I'm doing OK.

The next briefing was given by the self proclaimed "Condom Queen". This lady came in with a bag that had various condoms all over it. She was pretty funny and went through her "shock and awe" presentation showing us all the gross stuff that STDs can do to you with some very graphic photos that I could have done without. I don't care to see penis, vaginas and butts all messed up with diseases. During the brief anyone that answered a question from her was given a condom from her condom bag. She had various colors, flavors, and even glow in the dark ones.

We waited a bit for the next brief, but they never showed up so we were let go early around 1100. I headed to work on getting the rest of my in-processing done. We have a sheet that has a number of things we need to get checked off before we can finish in-processing. These briefs are part of them and they have specific times, but there are numerous others that require no appointments and we can just go in and get the in-processing done. I was able to turn in my medical and dental records. I finished Tri-Care, Transportation, Army Community Services, and also the drivers licensing office which set a date for me to take my test to get a license so I can drive here in Germany.

I ate lunch with a guy from my battalion and a young girl that sat next to me. We headed to Popeye's and then wasted some time at the PowerZone and the book store. This young girl is only 18 and is here on her first duty assignment. It blows my mind when I think that I have a daughter who is only 3 years younger. I still think of her as this young child, but in three years she is going to be out and about in the world…pretty crazy!

A specialist I hadn't met yet from our battalion came and picked us up and dropped me off at my place. I was home about 1530. I guess I'm lucky because the other guy always has to go to the PT formation each morning just to check in and the evening formation as well. He also has to go to his office each day, but doesn't have a computer account yet so he can't do much.

Once home I walked to the commissary to pick up some items and then had dinner with my wife. I then started to read my study guide for the drivers test that I'll have to take next week. There is a lot of stuff I have to learn. I hear a lot of people fail it the first time…I'm hoping I'm not one of those!