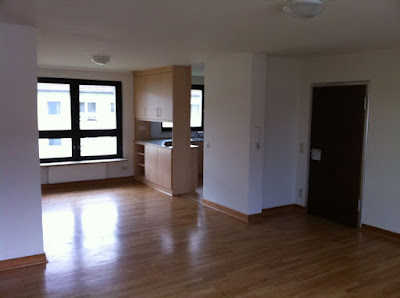 A photo of the unit we chose. This picture is from the living room looking
into the dining area and the kitchen off to the right.

This morning my sponsor called about 0645. I was already up, but just not out of bed yet. Since we didn't meet up yesterday as planned, we never made any time for him to pick me up today. He said he'd be here to pick me up at 0820. I got up and prepared myself for the day.

Once my sponsor picked me up, we headed to the main in-processing place for the post. I've said before that USAG Baden-Württemberg is broken up into several pieces. I live on PHV, work at Campbell Barracks, and the shopping area also has the in-processing center for the post. My sponsor dropped me off and planned to meet back up with me at noon when my briefings were over.

I headed to a classroom type setting and ended up sitting in the front row. Then came the "Death By PowerPoint" in-processing briefings. Today we had the commissary, customs, tax relief, USO, AAFES, Environmental, Community Bank, TKS, BOSS, and TARP. A couple such as Red Cross and Claims didn't show up. The most interesting one was TARP which had to do with spies and such. Similar to the ones we had in Korea, this briefing gave us a few examples of what has happened not only around the world but close to this area as well. We went over what to look out for and how to report it. It turns out that most of the traitors and people working on the inside give a number of signs that should be reported.

Another brief that I enjoyed was the BOSS brief. The briefer was a pretty entertaining guy who was unlike most briefers who just stand up at the front and read what's on the slide in front of you. This sergeant was genuinely excited about being with BOSS. For those of you who don't know BOSS stands for "Better Opportunities for Single Soldiers" When I was in Korea, they threw in unaccompanied soldiers as well. The briefer here said that he wants everyone including families to get involved. BOSS has a number of volunteer activities, stuff and activities to enhance the lives of soldiers and boost morale, and they do tours and trips as well. The tours part interested me the most. I want to make the most of my time while stationed in Germany. I doubt I'll have another opportunity in my life where I'm getting paid to live in Europe. I want to visit as many places as possible and soak in every experience I can while I'm here.

After the briefings I met up with my sponsor and we headed to the food court for lunch. We then went to TKS which is the local Internet, TV and phone provider here on post. I signed up for an Internet and phone package. I haven't had a normal land line in years, but this one comes with their cheapest package and it turns out that all calls to the US are free. What's funny is that even though calls to the US are free, calls around Germany cost extra per minute. We get the basic AFN channels for free, so I didn't bother getting anything extra.

My sponsor and I then went to "The Power Zone" which is basically the electronics store on post and I bought a pre-paid cell phone. We'll use this and once our household goods arrive I'll jailbreak my iPhone and use the pre-paid SIM card in my iPhone. I want to wait until I get my desktop computer though, so I can transfer all my crap to it from my phone. We'll do the same with my wife's as well. The contract phone's here are pretty expensive and I've heard that it's hard to get out of the contracts and there can be surprises if you're not careful.

We headed back to our room and picked up some of our luggage along with my wife and took it over to our new unit. We then headed to the recycling station on post where they also have a place that lends out items. We picked up some of the very basics such as pots and pans with a few dishes to get us by until our household goods arrive. We are scheduled for the pre-inspection tomorrow and our loaner furniture is scheduled to arrive shortly after. We have to check out of our temporary room by 1100 tomorrow.

My sponsor dropped us back off at our room and we watched a couple "Sons of Anarchy" while eating dinner and hanging out. I received an email that said my shipment of my stuff from Korea arrived today. I gave them a call to schedule delivery. They said it would be this coming Monday between 0800 and 1600. Really? That is worse than the cable repair guy!

Email ThisBlogThis!Share to TwitterShare to FacebookShare to Pinterest
Labels: 25B, Army, death by powerpoint, Germany, In-Processing