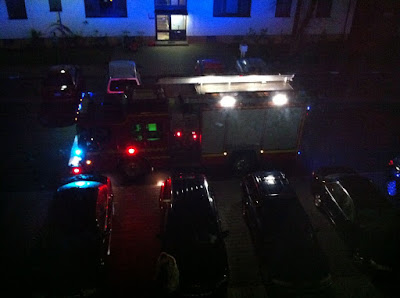 Kind of hard to tell, but that is a the view of the fire truck from our window.
The fire department had to come and shut off the alarm for our stairwell.

Last night just after falling asleep…well it was more like the point where I was in-between being awake and asleep…I hear this strange noise like an alarm and my first thought was that my cell phone had a strange ring or something. I then came to and realized there was a fire alarm going off in the stairwell of our unit. Our units have a stairway leading up with a total of 6 apartments (3 on each side). We are on the third floor, I looked out the window and saw a couple of people outside already. My wife and I threw on some sweats and headed out as well. Our neighbors said this unfortunately is a common occurrence, the fire alarm seems to go off without reason at various times. Great! We waited for the fire department to come and turn it off before heading back up. So much for a good night's sleep.

This morning's PT ended up being a spinning class. My boss picked me up and we drove to Campbell Barracks…this after a quick turn around to get my ID card I forgot. Once there since it was raining we ended up going inside the gym, and after a few minutes of everyone in the racquetball getting ready to do some sort of group exercise the platoon sergeant just told everyone to join the spinning class. It was my first time in such a class, and if my legs weren't still so sore from PT the last two days I would have been able to get a lot more out of it. We finished up and SPC Matrix gave me a ride home, then picked me up for work call which was at 0900.

I prepared myself a little better for today. Soon after arriving to work I had to fill out a sheet detailing what I will be doing this weekend. This is a requirement which I have heard about from the guys in the office. They all hate it with a passion. It seems pretty stupid to have to explain everything you'll be doing, we're all adults. I guess there has been trouble in the past with people getting drunk or getting in fights, now if they have this paper and you get in trouble somewhere, I guess you can get in more trouble if it's not on your paper. Pretty stupid, but such is life in the army. After filling that out I headed over to the shoppette and purchased a Stars and Stripes newspaper as well as a Mac Life magazine. Some reading material to keep me occupied instead of just sitting and staring at the wall. I wish I could take my iPad in to read, but there are no electronic devices allowed in our office unfortunately. I spent the morning reading every single article in the newspaper making sure to take my time even scanning the classifieds for the heck of it to pass the time.

Lunch was the usual…Subway in the food court. I then headed back to the office and started on my magazine. Surprisingly we were told we could leave early. We had to clean up before leaving (sweep, mop, wipe down the desks and take out the trash), but that was done pretty quick and we headed out and my boss gave me a ride home.

It was nice spending some time with my wife. We didn't do much even though it was a Friday night. Watched some TV shows, I read some of my book and then we headed to bed. We are planning to get up early tomorrow and ride with my boss and his family to Ramstein Air Force Base to check out their PX.