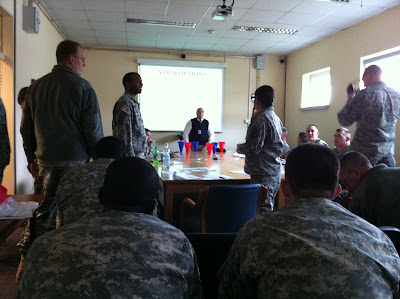 Part of the drugs and alcohol training. This exercise had a person wear "drunk glasses" and then try to bounce a ball into a cup. It was pretty funny how far off people were.

This morning we showed up for PT at 0630 and after the first formation, I was released along with 3 others from our platoon because we were heading to Landstuhl for training. Landstuhl is the location of the rest of our company. Our company headquarters and of course our company commander is located out there. I caught a ride back to my place from SPC Whirlwind. I then had plenty of time to get ready before he came back to pick me up at 0815. We met up with everyone else that was heading out with us from 1st platoon at the TMP van…7 of us total. The ride out to Landstuhl is an hour and a half or so and I slept most of the way there. Upon arrival I was impressed with all the huge satellite dishes all over the place. These things were huge and they were everywhere.

Once inside I had to do a little in-processing paperwork with the company. I was told to bring all my paperwork, so I grabbed my "I Love Me" book that has every important paper I've received in the army. I made copies of everything they wanted (PT card, Weapons card, Orders) and filled out some paperwork. The sergeant in the office asked if I was a 25B. When I told him yes he got a little excited and asked if I'd be working there with them. Unfortunately the answer is no…instead they have me not touching any computers, my talents will better serve the army by doing "the other side of 25B" which is only paperwork. We then all had to attend some more mandatory training. The same training we receive over and over again. The first block was given by the chaplain and was on suicide prevention. We then moved onto the next block given by a civilian lady on sexual assault and prevention. We took a lunch break and drove our TMP to Burger King for lunch.

After lunch we had our last block of training given by a pair of civilians on drug and alcohol abuse. Their block was by far the longest, they did their best to try and keep it interesting, but having just eaten a double bacon cheeseburger I was ready to fall asleep. Finally the training was over and I had to meet up with our company commander. He quickly asked me a few questions…married? children? do I drink? He was in a hurry and rushed through a speech I'm sure he gives all the new soldiers and then we took off.

On the way home I spoke quite a bit with a PV2 from 1st platoon. He got into trouble and had his rank reduced, so now he'll soon be promoted again to PFC…but he would be specialist if he didn't get into trouble. What a bummer! Everyone in the entire company just calls this guy McLovin. I guess it's because he looks just like Jonah Hill who plays in the movie Superbad where McLovin is referenced. It's pretty funny because everyone from privates to senior NCOs call him by that name.

When we arrived back at the office SPC Whirlwind had me give a practice security brief from the PowerPoint slides. This security brief is something we have to give our customers every time they come to renew their security keys. So soon I'll be giving my own mini death by PowerPoint presentations.

We then cleaned up and took off. My boss took me to the cleaners…to pick up my class A uniform. I then had to purchase a company patch to have sewn on, then dropped it off at the alteration shop. I also had to order a new name tag. Unfortunately when we stayed in temporary housing the maid threw away my bag of all my tags and ribbons. Now I have to purchase everything again. We have a Class A inspection next week, and I'm not sure I'll have everything in time. I guess we'll see what kind of drama that causes.

My boss then took me home where I ate dinner and hung out with my wife for the rest of the night.