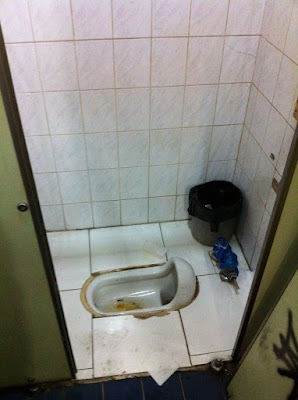 A picture I took a while back while out in Itaewon. Some toilets are normal...
and some are these. Just squat and take care of business!

Saturday: I'm glad I had this weekend to try and catch up on some rest. I didn't make any plans to do anything except just hang low and relax for the most part. I did laundry and video chatted with my wife in the morning. I then headed to the gym and worked out for about an hour.

In the late afternoon I went to the commissary to pick up some groceries. As I came out I saw the bus pulling up and grabbed my bags and jumped on the bus. As it left the commissary it headed straight out of the gate from the post. Oh Crap!! I grabbed my bags of groceries and jumped up and told the driver I needed off. It turns out this bus was headed towards K-16 (a small post located further south). I thought only the post run shuttle bus came through the commissary. I'll have to pay a little more attention on which bus I get on from now on. I walked to the nearest bus stop for the post shuttle and waited with all my groceries until the next bus came by to pick me up.

After I got back to my room I stayed inside for the rest of the day, it's so hot out I had no plans to go back out there. I think everyone else has the same idea because the post seems a little like a ghost town.

Sunday: I remembered late this morning that there was a UFC fight on. I tried to contact PFC Pickle, but he is hard to get a hold of since he broke his phone in a fit of rage by throwing it across his room. The only way to contact him is via Skype or Facebook chat. Since I couldn't contact him my only choice was to watch the UFC in my office, so I headed down to my office and went in our conference control room to watch the event. I can't complain, we have a comfy chair and there were no interruptions. All the fights were decent, I just didn't have anyone to enjoy it with.

I spent the afternoon video chatting with my wife and then cleaning up my room for a while. With me gone two weeks my roommate has let it go down hill. He does no cleaning at all. Because of this I only clean my side and of course the bathroom, I stay away from his side and don't touch any of his stuff when I'm sweeping or mopping. The bathroom was pretty gross…even to my standards. I'm not sure how he was able to get it so dirty.

I headed to the gym and worked out before heading to the PX to pick up a couple of supplies I missed from yesterday at the commissary. The rest of the day was spent in my air conditioned room doing SkillPorts and watching TV shows. I also did some reading on my new iPad which my wife got for my birthday while I was on leave. Reading a book on it is awesome, no need to worry about bookmarks…you just pick up where you left off. Plus it has a number of apps that I've downloaded. My favorite so far is one called Flipboard. It takes your Facebook, twitter, LinkedIn as well as several news feeds and puts them into one app. It also displays your Facebook more like a newspaper instead of the traditional feed, which makes it a lot funner to read. When not in use I set it up as a digital photo frame which I have to say is very awesome. I loaded it with a bunch of photos before I left and now enjoy hundreds of photos all day long.