Saturday: We woke up at around 0630…pretty early for me on a weekend, but I don't sleep heavy when there are people around that I'm not used to sleeping with. Ms. Q promptly changed into her workout clothes and went for a run. The air force master sergeant and I took off in search of coffee. We came upon a Dunkin Donuts and had coffee and a doughnut to start our day. We then took a walk along the beach to check out all the sand castles and sculptures. I was pretty impressed, there were some pretty good artists that came out to participate.

We then headed back to the room and waited for Ms. Q to finish getting ready. Once she was ready we headed back to the beach to stroll around in our bare feet. We ended up making it to the end of the beach and making our way along a path that came across a building that was used for the 2005 APEC summit. You could walk inside and see the places where each country was represented. We then made our way around the trail taking in the beautiful sites along the way. We headed back to the hotel to check out and moved to a better hotel located on the beach for our last night.

Ms. Q had been talking about TGIFs since we arrived, so we headed there for lunch and sat next to the window. It turned out to be perfect because there was an air show put on by what I'm guessing is the Korean version of the Blue Angels. Not sure who they were, but they were pretty good and fun to watch. As we were eating lunch we were joined by one of the air force master sergeant's friends. A very short little Filipino dude that is a civilian that works at Yongsan. He turned out to be the nicest guy ever. I had fun chatting with him at the table and getting to know him a bit. Let's call him Short Stuff (I have to come up with smaller nick names than "our air force master sergeant"…that is a long name to type every time I mention him)

After lunch Short Stuff said he was going to meet up with a friend of his and then we would all get together before dinner. The rest of us went to our room and took a nap. All of us were out cold for a good hour and a half. We then met up with another couple and their daughter that our air force master sergeant knows from his bowling team, Short Stuff and his buddy (a teacher over here for a year living in Busan), and a Korean and his girlfriend that our air force master sergeant met at church. The Korean wanted us all to experience something different, so we headed to a place where we actually picked out a fish that was swimming around to eat. The lady grabs the fish chops off his head and then starts to prepare it for us. We head up to the restaurant and then bring the raw fish out to us on a couple of plates along with a bunch of sauces and some lettuce. I've never eaten anything like this before, but I gave it a try. With all the sauces and such as well as having it wrapped up in lettuce made it not too bad. It's just the texture of raw fish that I didn't care for too much. We enjoyed some bamboo wine (more like whiskey) that our air force master sergeant brought along for the occasion.

We headed over to a small amusement park that we spotted not too far away from where we ate. The air force master sergeant and the couple's daughter got sick on the first ride they went on (the pirate ship that swings back and forth). Our air force master sergeant was sweating profusely and the young girl was not looking too hot. I went on a small "diving coaster" (roller coaster) and a "giant wheel" (ferris wheel) as well as one of those rides that raises you up really high, then drops you. It was pretty fun.

After that we headed back to the beach near our hotel, we had to take 3 taxis to get there. Along the way back a few hundred feet from our destination, our air force master sergeant jumped out of the car at a stoplight and said he'd meet us at the beach. We found out later he threw up all over a truck along the way back. Once we got back we heard the young girl also threw up once she arrived at the hotel. I would have been in the same boat going on that ride, I can't handle going back and forth like that.

We ended going out on the sand and watching a beach party for a while. They had a stage setup with a couple of DJs and other folks dancing around entertaining the crowd. We heard there was going to be fireworks, but they never came. We all ended up going in at around 1030 or so.


Sunday: We woke up at about 0700 and Ms. Q takes off and heads to the hotel fitness center to work out. We waited for her to finish before headed downstairs to the hotel's breakfast buffet. I gorged on pancakes, bacon, omelets, orange juice and the like. I ate so much I didn't have lunch and only had some trail mix for dinner…that's a good breakfast!

We went to the beach again and hung out for a bit before grabbing a taxi to check out the "Haedong Younggung Temple". This temple is located on the coast which is rare because most temples in Korea are located in the mountains. It was first built in 1376 and while walking around you can just imagine what it was like back in the day when the monks were strolling around the place. There were speakers spitting out some chanting monks along with some rhythmic drumming the entire time. The temple was pretty cool with a lot of big statues along with the sea right next to it. Just don't get too close to the sea as the air force master sergeant found out. He got a little too close and it was as slick as snot…he ended up on his butt. At least he didn't end up in the water! There were a ton of people there visiting (I would suggest going earlier rather than later because by the time we left traffic getting in and out of the place was crazy!!

We then grabbed a taxi back to the beach next to our hotel and spent a little time on the beach before leaving and heading to the train station. We got there early and found out we could trade our tickets in for an earlier train which was nice. I slept most of the train ride back. We took a taxi back to the post and had to make use of the "free translation" sign on the taxi. The driver calls a number and then we tell the person on the line where we want to go, that person then tells the taxi driver. It worked out pretty well as he dropped us off right in front of the main gate.

After this I headed to my room and relaxed. The air conditioning is now on so I fired that up and cooled the room off a bit. It's nice to go on leave, but now I have to get back to the grind and start doing schoolwork. 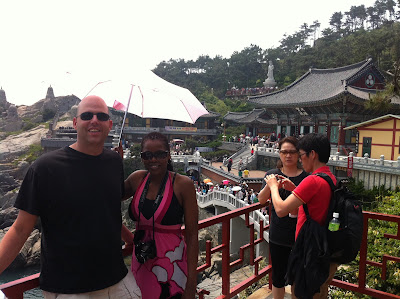 Our air force master sergeant along with Ms. Q at the Haedong Younggung Temple 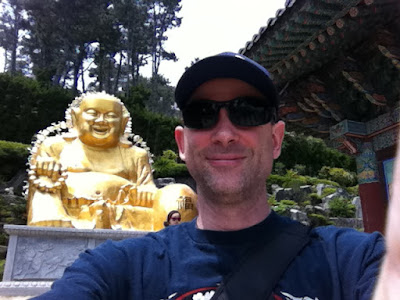