Work call this morning was 0830. We had no meetings scheduled, so I just headed straight to my office in our conference control room and did some SkillPorts. The ROKs came up and started setting up for a ceremony that was to be held in our conference room, so I gave them a hand getting everything ready. Not too long after that I got a call from our sergeant asking me to come down and help get ready for the upcoming BBQ.

I grabbed the keys to our office car and ended up driving our IMO and our supply sergeant around gathering supplies and dropping them off at the picnic area on post. On the last trip I headed off to our IMO's room to pick up condiments. She is a TSgt in the air force (an E6), so I was curious what her living quarters were like on post. I didn't get to look around much as I was walking back and forth from her refrigerator to the car, but they are definitely nicer than the barracks I live in. The small buildings house two people and it looked like they shared the kitchen and bathroom while having separate rooms that are similar to studio apartments.

I dropped her off at the picnic area and then headed back to the office to pick up some cleaning supplies and out of coincidence our KATUSA as well. We both made a pit-stop at our barracks to change into civilian clothes before heading to the picnic area. We arrived pretty much on time a little after noon.

The picnic was a hail and farewell for all of our SCJS offices. We ate a lot of good food and then had a little ceremony. I acted as proctor handing some awards to our air force major as he was giving some speeches. From our office they said farewell to our air force master sergeant who will be leaving in a week or so, as well as my sergeant who will be leaving in August. Our supply KATUSA will be leaving as well as our sergeant major. There were a number of KATUSAs also from our protocol office who were leaving as well. You can tell these guys are so excited to be finishing up their mandatory service and get on with starting their adult lives.

I think everyone had a fun time, but the weather here is just so crazy lately. It has been raining cats and dogs this last week. Today there was no rain, but it was so hot and muggy it sucked. I had to take a shower after I got back from the picnic. 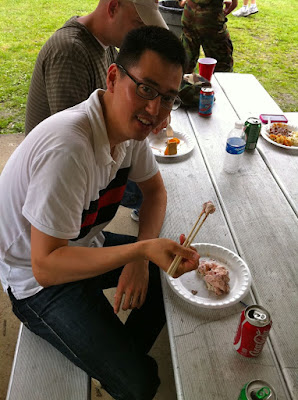