Work call this morning was at 0630. We setup for a KUB in the secret conference room. When we all finished our KATUSA and SPC Mick headed to the DFAC and I headed to the food court to grab a Starbucks coffee and some biscuits and gravy…hey it's Friday and I'm happy! I went back to the office and ate it in my lair. I was watching a little TV when my sergeant came up and said they needed someone to flip slides for the meeting we setup. Since I was the only one around and I had finished my food I headed down. Instead of flipping slides in the back control room they had me sitting one row behind everyone else. It was a little strange, it felt like I was part of the meeting.

Once the meeting was over we cleaned up and then I headed up to watch the NBA playoffs. What a great game! I don't know what I'm going to do when basketball is finished…there will be nothing on TV here! Our office decided to order Pizza School pizza again and we all ate some pizza and watched a little of the movie "300". After lunch I had to remind our sergeant that he told me I could take off after lunch because I came in on the weekend. He had plans of another board practice and such, but I needed to get ready for my weekend.

I took off and was able to video chat with my wife for a while before packing up my assault pack and heading off to the Dragon Hill Lodge to meet the air force master sergeant in our office. We are heading to Busan for a "sand festival" over the weekend. I'm so looking forward to it. One of the air force master sergeant's friends was there and coming with us. She is the aerobics instructor as well as a University of Phoenix instructor and administrator. I guess I'll call her Ms. Q since I can't think of anything witty at the moment.

We all jumped in a taxi and headed to Seoul Station where we hopped on the KTX train. This is a high speed bullet train that travels from Seoul to Busan at speeds up to 190 miles per hour. I've never ridden anything like this so I was pretty excited. What was interesting is that I never really felt the acceleration and it never felt like we were going very fast until you looked outside.

When we arrived in Busan we took a taxi to our hotel. Once we got in the driver wanted to charge us a flat fee of 40,000 Won (about $40). Ms. Q and the air force master sergeant would have non of it. They told him to use the meter or we're getting out. I guess taxi drivers will try and do this a lot to foreigners to get one over on them. We used the meter and ended up paying about 17,500 Won (about $17.50)!

We arrived at the hotel and checked in. Turns out the room wasn't exactly as they expected. There was a double bed and a single bed. I slept with the air force master sergeant and of course Ms. Q slept in the single....yes, I slept with a man....don’t ask don’t tell....please don’t tell. :) Before bed though we walked around the town, checked out the beach, and even saw a fight between some old drunk Koreans. 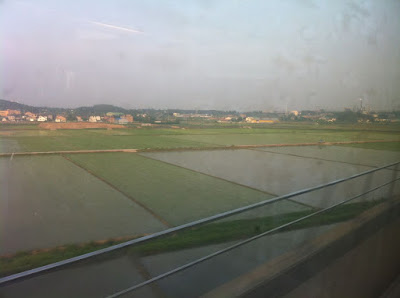 Rice patties flying by at 300 kilometers per hour 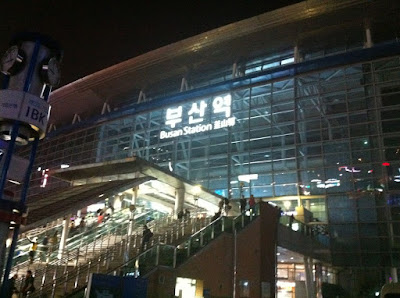 Leaving Busan Station and on our way to find a taxi.

And finally...a video I took shortly after arriving in Busan. This is what
happens when old Koreans drink too much soju!