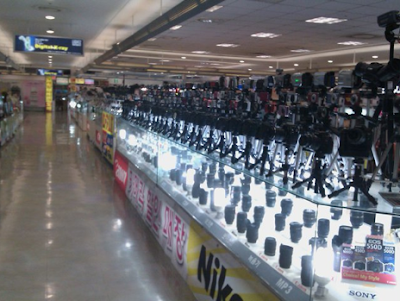 A picture inside the IPARK Mall on the camera floor

Friday: Work call today was 8:30. There were no meetings scheduled all day, so I just worked on SkillPorts. We all went over to the snack bar and grabbed lunch to go, then brought it back to our conference room and watched some TV while we ate lunch. Later on I went to the S1 shop at battalion and had them update my ERB (a quick snapshot of your service record). Mine was all messed up, it didn't show hardly anything that it was supposed to have on it. I had them add the three service ribbons that every soldier should have coming out of AIT right now. (Army Service Ribbon, National Defense Service Medal, and the Global War on Terrorism). I also had them add all the info about my associates degree and my security+ certification. I wanted them to add all the hours that I did last year in SkillPort but I guess until the new promotion point system is all switched over they can't do anything. He also told me I will get another ribbon in a month or two for being here in Korea. On the way back into our building the sliding doors were shut for a strange reason. I was told I had to scan my ID card in order to open them…this is something new. I guess they only open the doors for O6 and above, everyone else who's card doesn't work in the front door has to come in the side door. Mine works so I guess I'm special…lol

When I got back I filled out some more paperwork to become the IMO assistant. I'll be able to help out the IMO in the admin office which means I will be able to actually do some computer work now and then. We then headed to the gym for PT. There wasn't any basketball going on so I just did some chest and abs workout. My sergeant asked how I'd like to take the PT test in March…I said that would be fine. He thought it would be a little better because it'll be a little warmer. That's fine with me.

The night consisted of me and the young hawaiian going to the theatre which was packed with what I think was the entire high school student body here on post. We saw The Green Hornet which was a pretty good flick. We had a few laughs then called it a night.

Saturday: My Saturday ritual was a little mixed up today. I slept in of course, but I wasn't able to do my laundry because they were all full. I met up with the young hawaiian and we headed off post to go to the IPARK Mall. This is the same mall we had visited before with PV2 Pickle. The young hawaiian and I thought we would be pretty smart and take the subway this time since it is a bit of a walk. The young hawaiian had ridden it before and said it's pretty easy to figure out. I'm not sure what or how it happened, but we got on a subway train and when we got off instead of being close or even near the mall…we ended up quite a bit farther away. We decided to just walk to it and take the subway when we have a Korean to come with us and guide us until we get a little more experience.

We arrived at the mall starving, so we headed to restaurant row and picked out a place called "Fusion Fried Rice". I had a dish called Pizza Fried Rice...and it was awesome! With our stomachs full we browsed the mall. They have a big open floor plan for all their electronics vendors. There is an entire floor for cameras & MP3 players, 2 floors for computers, a floor for cell phones…this place is crazy! I was looking for a desk lamp so I could get ready a little easier in the morning when my roommate is still sleeping. I found a lot of them, but they were charging 50,000-60,000 Won (roughly $50-$60). We finally found a cheaper model that I got for 15,000 Won after the young hawaiian talked him down from 20,000.

When we left we went through an alley that has a bunch of what I'm told are called "glass houses". This place was less than a block away from the mall right in the middle of town. It is also more than just an alley, it's more like about half a city block. It consists of girls (prostitutes) sitting behind a glass window showing off themselves for people walking by (or driving through the alley). We were both surprised that there were a number of girls already in the windows and it wasn't even night time yet. I pictured them being empty until it was dark and shady out. Anytime one of the women would look at us and smile or wave we would both giggle like little kids and keep walking. It was a very surreal experience. I've read about places like this and even envisioned what they would look like, but I never thought I would see one myself.

After the glass house experience we headed back and I did schoolwork for the rest of the night. I also had a chance to finish my laundry.

Sunday: Did a little cleaning and some SkillPorts as well as some schoolwork along with video chatting with my wife. I spent the entire day inside my barracks. I got a call from my sergeant saying that there would be no PT in the morning because it's snowing…holy cow! I didn't even know it was snowing!! I had just been on the computer alternating between SkillPorts, school, and episodes of season 3 of "Chuck". Our work call is at 1000 tomorrow, but I have to go see if I'm having a driving class at battalion at 0800. Sucks because I would love to be able to sleep in again. If there is no class, then I can head back to my room and wait until the 1000 work call.