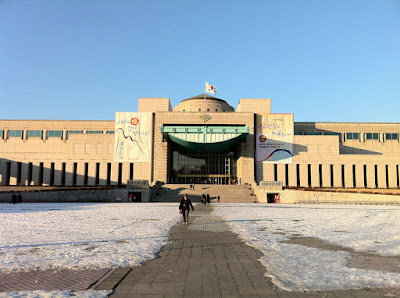 The Korean War Museum...a must see while visiting Seoul (and it's free!)


Saturday: Had to get moving a little earlier than planned today. Our sergeant said he wanted to do some PT at 1000 in the gym. It was specifically for SPC Short to help him pass his PT test and wasn't mandatory for anyone else, but I think it looks good if you show up. I got a move on and made my way to the gym. SPC Short was there and our KATUSA, but no sergeant. He just never showed up! I did a little weights, a little basketball, and then some sit-ups and called it a day.

Like every other Saturday I did laundry. I video chatted with my wife for a bit, then PV2 Pickle (He just got promoted recently) came over. We were waiting for the young hawaiian to come over, but he was having issues with his laundry machine in his barracks. PV2 Pickle & I took the bus to the commissary. I'm so glad I know about the post shuttle now. Last time I walked all the way there and back with all my groceries. There is a free post shuttle that basically just does circles around the base and comes every half hour (on the weekends). We both did our shopping and got out right as the next bus was arriving at the commissary.

The young hawaiian then finally made it over and we all walked down to the theatre to see tonight's movie "True Grit" with Jeff Bridges. It was pretty good. The young girl in it really makes the movie. After that we headed back to my room and had a few beers and watched Tosh.0 on my laptop. That show cracked us all up. If you've never seen it, you should!

Sunday: Woke up and video chatted with my wife. The nice thing about the weekends is that when video chatting I can actually talk to her at a decent time for her. Later on I met up with PV2 Pickle and the young hawaiian. We went to the Korean war museum which is pretty much next door to this garrison. PV2 Pickle and I have both been there before when we were in-processing, but the young hawaiian never had the chance. When his group was planning on going it got cancelled because of snow. So PV2 Pickle and I offered to take him over there and show him around. We had both wanted to go back anyways because the place is huge and we felt a little rushed last time.

The museum was awesome again and there was also a new 3-D art exhibit thrown in just for the heck of it…didn't have anything to do with Korean war, but it sure was cool. After spending hours in the museum and taking hundreds of pictures (PV2 Pickle actually took 403 just himself) the young hawaiian wanted to eat somewhere off post. We just started walking down the street looking for a place. Little did we know there wasn't a restaurant for what seemed like 2 or 3 miles. It was cold and we were starting to wonder when we were going to find a place. Finally we came across a place that was actually open and had pictures of some good looking chicken dishes on the window. We went in this little hole in the wall restaurant and when the lady gave us the menu to our surprise it was only Korean letters…no pictures like we had hoped. The waitress sensed our dilemma and asked "Chicken?". We all nodded and soon she came out with some fried chicken along with some dipping sauces. It was pretty tasty and quite the experience. There was only one other couple in there and they were both smoking…strange to see that because you just never see that anymore in the states.

We then walked out and I happened to see a big building that said iPark Mall. We checked it out and found it was a huge mall. It had department stores, a ton of electronic stores, a "women's secret" (instead of Victoria's Secret), and all kinds of other stores you would expect to find in a mall. We then came upon a long row of restaurants which all had picture menus in both Korean and English…lol. No worries though..we had an experience. After walking around and exploring what seemed like only about 20% of the mall we headed out. On the way out we stopped at a street vendor and had a cup o' chicken. It was something like sweet 'n sour chicken in a cup. We were each given a pointy stick to stab each nugget and eat it. Good stuff!

As we headed back we realized how far we had walked from the base and how cold it was. We made a quick pit stop and grabbed some warm coffee before making it back to the base. Fun times!