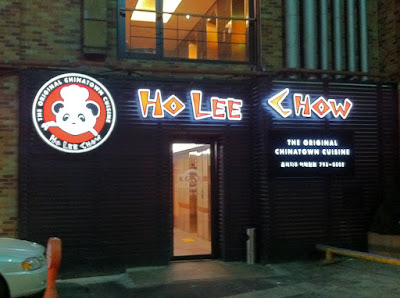 Holy Cow it's the Ho Lee Chow...Great Food in Itaewon!!

Today I had the experience of doing something I've never done before. We setup for a meeting (this one happened to be an awards ceremony). One of us had to stand and hand the general the awards so he could in turn hand them to the awardee. I was told I would be calling "Standby". I've seen and heard this done in the past, but I've never done it, let alone for the 4 star general here. Needless to say I was a bit nervous. Calling standby involves the soldier to stand at the door of the conference room and when the host of the meeting (the 4 star general in this case) gets within about 10 feet from you, you turn and walk to the entrance of the conference room. There you stand at attention and with a loud voice yell "Standby". At this point everyone in the room will stand up and the host will walk in and say "please be seated". I'm a pretty quite guy, so it doesn't come natural for me to yell out anything. I put on my glasses so I could make sure I saw the general coming from a distance (it wouldn't look good if I was squinting down the hall the entire time). I then did everything as planned. I surprised myself how loud I was…in fact I would say I was even a little proud of myself…lol. I then shut the doors to the room and headed to the control room to sit and be there in case there are any technical difficulties…a.k.a watch TV.

Later on in the day I was able to start getting my Outlook calendars setup. I had to request permissions to view a number of generals and other important calendars via my Outlook so I can see all the events that are coming. I'm still waiting on some, I think they'll all be done by Monday.

I was told around 1600 that I would be having a room inspection in my barracks at 1630. WTF? I still had to purchase a lot of cleaning equipment and I thought I would have a little more lead time before an inspection. Needless to say I didn't get everything in order before everyone from the office came into my room. My side was pretty organized, but the room in general needed some dusting, the floor needed to be mopped, and the toilet was still a mess from the young hawaiian's blow out the other day. My sergeant said he'd be back in a few hours to check. To my great relief SPC Short said to come to his room and he'd give me a hand. He let me borrow all his supplies and he also came down and helped clean everything up. If it wasn't for this guy I'd be pretty much lost here. I'm going to have to do something special for him before he goes. What an awesome dude! My sergeant came back and said everything looked good. I told him now that it's clean (it was dirty as hell when I moved in) I'll be able to maintain especially once I purchase cleaning supplies this weekend.

It's Friday night and the young hawaiian was itching to get off post and go out. This is the first weekend he's had a chance to get off post because of being in reception. We met up and headed off to Itaewon. First thing we did was look and try and find a place to eat. Itaewon has a number of different restaurants…everything from American to Arabic. We came across a place called "Ho Lee Chow" and decided it was the place. They served Chinese food family style, so we both ordered a dish and shared. The food was awesome and we got stuffed.

Next stop…finding a place to have a drink. We stopped by a number of bars, but they were either very expensive or totally dead. We kept searching. The young hawaiian wanted to venture off the main drag and see what was on the side streets. It's amazing how much it changes just one street over. I would say it's a little darker…a little edgy. There were still a number of food vendors which we took note. I'd like to try so many places here, I think I could spend a couple of years going out each weekend trying all the different food here. We always found ourselves dodging scooters coming from the front and behind us. I felt like we were in a real life Frogger game. We looked around and noticed we must have ventured into Islamic land. There were a number of Islamic restaurants, stores, and "learning centers". I was hoping we weren't going to stumble upon any extremists that wanted to kill us both. We hurriedly moved on.

As we were walking along I made eye contact with what looked like an Eskimo. (It's freakin' cold here at night). This chick had on a big coat with a furry hood. When she saw me looking at here she walked straight at me. "Sex…you want sex? 100,000 (about $100) any ting you want" then she looked and saw the young hawaiian was with me and said "50,000 each both…every ting you want". We both started laughing and I was thinking OMG I can't believe this is really happening. We walked off and the chick grabbed my arm with both of hers and started walking with us. We both kept saying "no no no", but she wouldn't hear it. The young hawaiian was getting a pretty good kick out of it and couldn't stop laughing. I said we're going back to the main street…enough of the side streets. The eskimo would not let me go. I was afraid I would have to shake her off and make a run for it. Finally after about 2 blocks she got the hint that we weren't interested and saw another guy to pester. OMG…OMG…OMG. I really couldn't believe that just happened.

We ended up going to a bar called UN. We went in and it was full of American military, a table of gay men, and juicy girls. Juicy girls basically hang on the guys at the bar and get them to buy them drinks. We drank some “Hite” a Korean beer I wanted to try, not too bad. We had a lot of fun just people watching. The gay Koreans dancing, the juicy girls trying to work the dudes and a very drunk Korean guy who cracked us up.

What a night. So much happening I think it deserves it's own entry instead of being part of a weekend wrap-up. I'm going to have to catch up with the next entries at a later date.