Confessions of an Addict - (Korea) Day 36 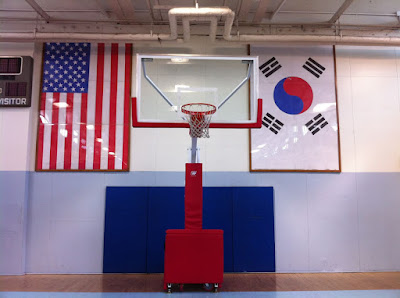 Trent Gym - Where I play basketball


This morning I woke up a half hour earlier than normal so I could get into work a little early. We have a weekly meeting on Wednesday that we have to prepare for. This meeting is one that I will be running consistently, but it is not in our normal conference room. I arrived at work and SPC Short started showing me what to do. About 45 minutes into the meeting I was told they needed me in our normal conference room to help out. There was a big promotion ceremony for a colonel going to general. I had to man the computer and press the play button when it was time to start the national anthems (Korean & American). I tell you this is totally not the kind of job I was expecting…lol. For the rest of the meeting I had to stay back there to make sure the sound system had no glitches…so I sat back and watched the Ohio State and Arkansas football game.

I found out after lunch that my CAC card finally works and I can now log into the network. I was able to log in and get the basics setup which was nice. I hate just sitting doing nothing when we have down time. At least now I can do some SkillPorts or something. I can't believe I've been here over a month already. I still feel pretty out of the loop at work, I basically just do whatever I'm told. Now that I have access to the network I'm hoping I can get the hang of everything a little more and be a little more proactive in my job. I spoke with my sergeant about the openings again and he said he should have a list tomorrow. Still working on that…I wonder how long this process will actually take. It may be a good thing that I'm starting early.

We got out of work at 16:00 and headed to the gym to get some PT. Today was cardio day (a.k.a. basketball). We started playing 3 on 3 and as more people came we ended up playing 5 on 5 full court. I didn't stop until 18:30. OMG I could barely walk afterwards. I am definitely too old for that anymore. My knees hurt and I think I pulled my hamstring. I'm a freakin' wreck. It's like a drug…I can't stop playing, but when I play my body pays a price. I'm going to have to go to basketball player's anonymous…lol

I got back to the barracks gave my wife a quick call and we video chatted via Skype. The new version for the iPhone now lets her use the iPhone's camera while I use my computer's camera. This makes it a little more convenient for her. I got a big box from her in the mail today and I was able to open it and go through it while chatting with her. It's so awesome getting stuff in the mail from home. I got a bunch of homemade treats, pictures in frames and more. I'm truly a lucky guy.

My night time consisted of the usual…I watched a movie. This blog is going to turn into less of what the army is like and more of my reviews on movies…lol. I guess it’s because that’s what passes the time...and has passed the time for me since AIT. Tonight's movie was on the same theme of last night's movie. I watched American Pie - The Naked Mile. Like last night's it wasn't bad, but not as good as the original. It was entertaining not to mention a lot of boobies, which is always entertaining. It also had a number of midgets in it…and that makes it worth it right there to rent the flick!