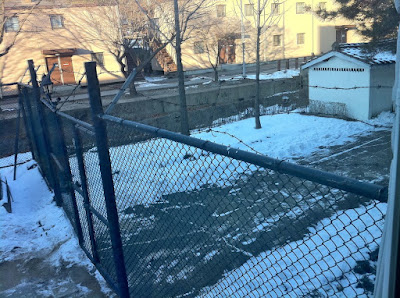 Work call was at 0830 this morning. We had a morning meeting in our conference room. Once we got that setup I hung out in the control room to make sure everything went smoothly. I heard that SPC Short didn't pass his PT test this morning. It's too bad because I thought for sure he would pass this time. I'm not sure how it will affect him and his future in the army if he can't pass it. I've heard you can get flagged and when you're flagged you basically can't do anything. Any requests will be denied such as leave.

I worked on SkillPorts again. My office next to the conference room is an awesome place to get away from everything. I can work on the computer without interruption. I talked to my sergeant again about the 25B openings again. To my surprise he said it was sent earlier, but the file was too big and that's why it never showed up in his inbox. His buddy is going to send it again, so I should be seeing it tomorrow.

Left around 1500 for PT which ended up being all basketball. We played some Korean honor guard soldiers. That is one myth I found out shortly after arriving here in Korea. Not all Koreans are short. There are a number of tall ones. I thought I would be towering over all of them at 6'1", but there are plenty that are as tall or taller than me. One of the honor guards on my team was dunking effortlessly. We had a decent workout although SPC Short was supposed to show up, but never did. He finally answered a call from SPC Roy and our sergeant talked to him and was pissed. I guess he fell asleep in his bed. Wonder if anything will happen to him tomorrow?

I started class at University of Phoenix tonight again finally. I am in a fundamentals of programming class. Hopefully I'll be able to keep up with schoolwork and normal work as well. I really want to finish my bachelor degree. The army will pay for school while I'm in active duty and it doesn't use the G.I. bill, it uses something called TA (tuition assistance). We get $4,500 a year to use and we don't have to pay it back, one of the great benefits the military offers…but a lot of people don't take advantage of it.