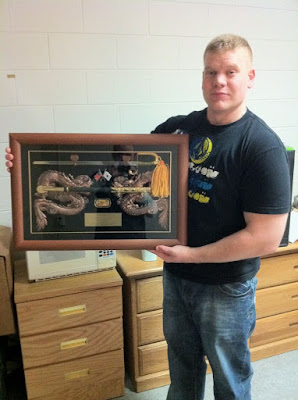 
Work call this morning was 0830. We had a meeting to setup for at 0930, after that the day was clear as far as meetings go. During the meeting I was in the control room making sure nothing went wrong. The microphones we have out on the tables are little omnidirectional ones. They work and pick up all the people around them, but they sit on top of the table which is glass and a lot of times there is feedback. I have to listen and slowly turn down the microphones if it starts getting bad as was the case during this meeting.

I had the TV on as well in the control room watching some college basketball. It's funny how every commercial they show here is either for something on post, or a public service announcement…don't steal from the PX, be aware of spies when off post, don't drink and be stupid, sexual assault is bad…etc. The commercials are low budget and very cheesy. They throw in little news bits now and then just to mix it up a bit I guess.

After the meeting I had to do some more mandatory training with the rest of the office. Similar to the human trafficking training we did the other day, there were slides and we all took turns reading the content. The training was on spies and how we have to be very careful about what we post online and who and what we say when talking to people. I paid close attention to this since I actually do blog online, of course I don't put any sensitive information in my journal…but I still have to think twice when posting anything. We then did training on drugs and specifically Oxycontin. I guess there has been a problem lately with people abusing this drug. It is being randomly checked for in the urinalysis tests. The last training was on underage drinking and binge drinking. Don't do it was the basic message. Don't drink if you're underage and don't supply alcohol to minors, you can get into big trouble for it.

For lunch we had a pizza party in the protocol office. There is a sergeant who is retiring and of course SPC Short is leaving Korea. There were some speeches made and some pretty cool awards given out. The funny thing is that SPC Short got a very nice gift from everyone in the unit, the sergeant who has been in for 20 years and is retiring got a very small one. I guess he isn't well liked.

After the pizza party I turned in two certificates of completion for some SkillPorts to my sergeant. He said we were going to get a negative counseling statement if we didn't do at least two SkillPorts each week. That is some good encouragement to get them done I guess, and it's only benefiting us in the future.

After work I hung out in the barracks for a bit and ate dinner. SPC Short gave me a call and said he took his PT test again after work and finally passed! This was great news because he is leaving next Wednesday. He has an award waiting for him as well that he would only get if he passed his test. I went over and hung out with him for a bit and congratulated him. He is very excited to finally go home and spend time with his family.

Later on in the night the young hawaiian called and asked if I wanted to head out to Itaewon. I said sure and called PV2 Pickle to see if he wanted to join us. We all ended up leaving a little after 2200. It was very cold…so cold our faces started to go numb. I think this will end up being a lot more fun in the warmer months of the year. We still had fun even though we wound up getting totally lost venturing off the main road and going up and down a few alleys. We had to use the young hawaiian's GPS to find our way back. We ended up going to a bar called "Rock and Roll Bar". I thought it was very cool. It was an intimate bar with a pool table at the end. The music they played was great (lots of 80s to present rock). The music was also not too loud, it was nice to be able to talk to the people next to you without yelling. And perhaps best of all…the pool table was free to play. We drank and played pool until we realized that it was already after 0200. There is no last call in Itaewon. We finished our beers and headed out. The guys were hungry so we stopped at a street vendor and picked up some sort of meat on a stick…not sure exactly what it was, but it was good. We also ended up going in the McDonalds on the way back. I didn't get anything…I couldn't find their 1000 Won menu. PV2 got a special Big Mac that had bacon on it…how cool is that?

We made our way back to the barracks and after finding out that 2 of the gates were closed we finally found a way in. It was a long cold walk, but we all had a good time. I think it was almost 0400 before I got in bed. I think we'll have to start a little earlier next time for sure!