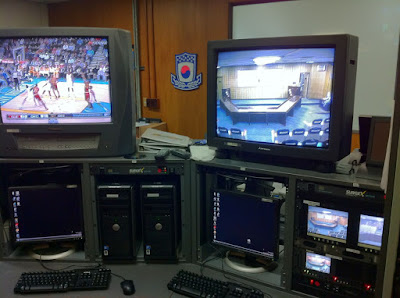 A view of the conference room control center. This is where I watch basketball
and control the PowerPoint slides for the meetings.

Work call this morning was at 0830. I had to setup for a meeting in our conference room that was at 1000. I could barely stay awake during it. There was a major in the control room with me flipping the slides for the presentation that was going on. If he wasn't in there I don't know if I would have been able to stay awake. It's starting to make sense why I saw SPC Short with a can on Monster energy drink in his hand constantly. I just sat there in case there was a technical emergency and watched some college basketball which was on mute.

After the meeting I went to lunch in my barracks room. I was looking forward to video chatting with my wife, but when I got to the room I found my roommate asleep. So much for video chatting…I just ate in silence and went on Facebook while listening to music on my headphones.

After lunch we received some bad news. I saw it coming a while ago and actually I'm surprised it took this long. Because of the two guys in our office who failed their PT tests at times, we now have to do PT with the company in the morning instead of doing it ourselves in the afternoon. I guess we have lost that privilege. Personally I think only the ones who are having difficulty staying in shape on their own should have to do the company PT at the crack of dawn.

I then headed up to my office in the conference room planning on doing some SkillPorts, but to my surprise some people followed me up and said they were having a meeting. Our KATUSA had just told me he thought it was cancelled…I guess not. I got the system up and running and had to sit in the control room with an air force chick who was flipping the slides…I watched some more basketball.

After the meeting we had our office and our sister offices come up to the conference room. Our colonel presented an award to SPC Short. The award has been waiting for him for a few months, but he couldn't have it until he passed his PT test. Nothing like waiting until the last minute! SPC Short accepted it and we all shook his hand and then he took off to catch a ride off to the plane to take him back to his family…lucky guy. After the presentation our colonel asked everyone to stay. He had great things to say about SPC Short, but he gave us all the "PT is very important" speech. Then we also got to hear our sergeant major give another little "PT is very important" speech. She spoke about how SPC Short did a lot of things that are normally done by higher ranking individuals. She went on to talk about all the experience they usually have in the office…then she looked right at me and said….. "now we have someone straight out of AIT". WTF? Nothing I can do about that. I didn't choose this assignment and if I was actually working on computers, I would have more experience than most.

Speaking of doing my job…later on my job was to hold the door open for a meeting that was coming up. As I'm standing there another PFC from the dungeon asks me what my MOS is. Turns out he's a 25C and he doesn't do his job either. He says what I'm thinking "Good thing they sent us to all that schooling so we can stand here and hold doors open for officers".

I got out of work about 1530 and headed to the gym for PT. I rode a bicycle and then did some abs work with SPC Lee who was doing "fat boy" PT with our sergeant. Me and our KATUSA joined him to give him a little support. We did a lot of variations of leg lifts. 6 inches off the ground…spread 'em…to the right…to the left…..all the way up…back down - 6 inches. A great workout form my abs.

My KATUSA roommate just brought over a cell phone hot spot for us to try. We really get ripped off using the only provider of internet for our barracks. $59 a month is a lot and the speed isn't that great. We pay it because it's the only option we have. Turns out that outside of base internet is much much cheaper. In fact the hot spot that we are testing is only about $20 a month. Everything seems to be working fine with it, so I may be switching and saving quite a bit.