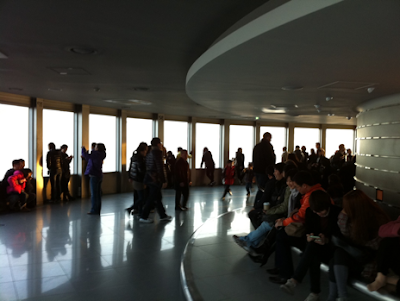 A photo from the observation floor of The Seoul Tower

Friday: Today turned out to be a day of recovery. I had way too much soju last night with SPC Roy. I woke up and knew right away that it was going to be a rough day. My stomach wasn't feeling good and I had a major headache. When I stood up I was even a little dizzy. I had to call and cancel with the master sergeant in our office. We had planned to go to Osan for some shopping, but there was no way I was going to be able to do that today. All I did was get a lot more sleep and then do some school work before doing my taxes finally. I then was able to video chat with my wife for a while before finishing up the night watching some TV shows. I didn't even go outside all day.

Saturday: I started off the day with my laundry and then went to the gym for a good workout. PV2 Pickle wanted to go out and do something this weekend so we headed up to Seoul Tower. It's an observation tower that overlooks the city of Seoul. The tower is 777 feet tall which is a bit taller than the Space Needle of Seattle which is where I'm from (605 ft). I have to say the The Space Needle offers a better experience because you can go outside. The Seoul Tower only lets you view from behind glass, but it's still an awesome view. It also has the best urinals I've ever had the chance to use. While you are relieving yourself you can still take in the view of the city! Check out The Seoul Tower website here.

We were planning on heading back to watch a movie on the base, but PV2 Pickle wanted to have a drink or two. So we headed to Itaewon via taxi. We were waiting for a bus to come, but after waiting for about 10 minutes in the cold a taxi came up and as the people got out, we jumped in. PV2 was craving McDonalds for some reason, so we made that our first stop. The McDonalds here offers some items on the menu that the states don't have. I tried a bacon tomato sandwich which is basically a Big Mac with a tomato and bacon added. They also have some very tasty spicy chicken and spicy beef wraps. We then took off to what I think is my favorite bar so far. It's called The Rock and Roll bar. I've been there before and just enjoy the music. The play music videos of 80's and 90's rock. It's a pretty small place and usually isn't very full. Plus they have free pool.

Not too long after we sat down two "juicy girls" sat down with us. I may have explained what a juicy girl is, but this was our first interaction with them. In reception we were warned about them and PV2 Pickle knew these two were juicy girls (more about that in a minute). First let me tell you in a little more detail what a juicy girl is. They work for the bar, they get friendly with the customers and get them to buy them drinks. Their "drinks" are supposed to be rum & coke or gin & tonic, but they are basically just soda with very little to no alcohol in them. So you will never be able to drink them under the table. They come and sit with you and make conversation and each time they finish their drinks and you finish yours, they will ask if they can have another. They serve the drinks and it continues…a vicious cycle. PV2 was smitten with the juicy girl that was talking to him. We all played pool and drank. The young hawaiian showed up with his roommate eventually and we all played some more pool. PV2 was able to get a kiss here and there along with some roaming hands with his juicy girl. At this point he was buying drinks for her non stop. I didn't realize how much until he got his bill. $600!!!!! OMG!!!! OMFG!!!!! He paid it with a credit card and it took me a while to talk him into leaving. He didn't want to let his juicy girl go, but I wasn't going to let him spend any more money there. So listen to me right now…if you are going to Korea, do not buy juicy girls drinks…it's a waste of money!!!!

PV2 wanted McDonalds again, so we headed there on the way back to post. We were all sitting down eating and then a bunch of American soldiers came in. It's a little after 2 AM and these guys are drunk and loud. They are the kind of guys that embarrass America. Here we are in a foreign country and these guys are being so loud, obnoxious and rude. We finished up and left. We went across the street to try and hail a cab, PV2 Pickle didn't feel like he could walk all the way to the post. During this time the unruly soldiers came out and kicked a taxi cab, then started yelling at the driver. We just walked off towards post, I didn't want any part of that. (looking back I should have recorded it, just to show how stupid these guys were and how they make us all look bad) A few minutes later we heard the MPs coming. The young hawaiian and his roommate went back to watch, but I had to help PV2 get back to his room so we kept going. I heard later that there was a fight in a different part of Itaewon where a guy broke his jaw and there was even a sergeant involved. It involved soldiers from the young hawaiian's barracks. When we got back to my room I just let PV2 sleep on my roommates bed, I didn't think he could make it back to his room which is another quarter mile away. 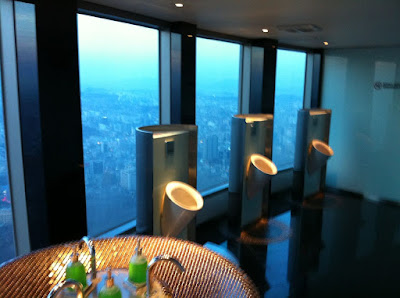 The urinals inside The Seoul Tower...
the greatest view I've ever had while going pee! 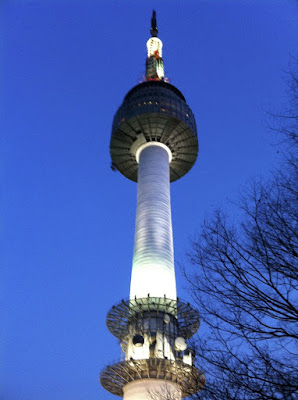 The Seoul Tower at dusk with it's lights on

Sunday: We both woke up around 11AM and PV2 Pickle had a pretty bad hangover. I didn't realize he drank so much, I'm a bad battle buddy. I had about 5 beers, but over a long amount of time. I felt fine, but he was feeling like I was on Friday…LOL. He headed home and I headed over to the other barracks because I thought the UFC fight was on. I found out when I got there that it's next weekend and not this one….Do'h!

So I came back to my room and did some schoolwork as well as studied a bit for my Apple re-certification exam. I then worked out at the gym and watched some TV shows and chatted with my wife. The whole day was pretty laid back, I did a little shopping at the PX for some basic supplies and then for dinner went with the young hawaiian off post to the Pizza School restaurant. Pretty good pizza and it's cheap. We tried a Mexican pizza which was not only good, it only cost $11 for it and two drinks.

Back in my room I think a girl down the hall broke up with her boyfriend. He was outside her door going nuts. He started screaming and then crying and then screaming again. I had my headphones in and could still hear it. He finally left, that is more drama than we've ever had since I've been in these barracks. I think I'm gonna watch some TV shows now.

We have juicy girls in Cocoa Beach FL. But they are strippers. So....thanks for the heads up.

Yeah...the juicy girls here don't strip or anything like that, but will still get their prey to spend a whole lot of money on them. They are more like mega flirts. Some will let you get to first or second base, but that is it. I would advise everyone to stay away from them and save your money.


(Looks like after an upgrade to iWeb and I'm guessing some upgrades or modifications on the mobileme backend comments are now working again!)