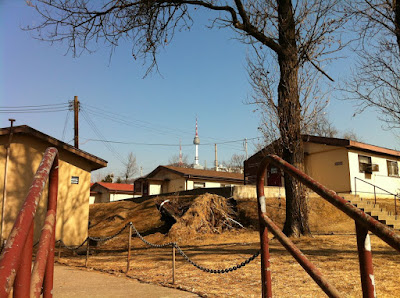 Work call this morning was at 0645. Not extremely early, but still almost 2 hours before normal. We had to setup for a huge meeting in the secret conference room. Every seat was assigned, so others that wanted to attend had to view from an overflow room. I couldn't believe how many generals were in there. It looked like they grabbed every general from across the country and had them come to this meeting. I had to show colonels and other brass where the overflow room was because there just wasn't enough room for them. I was the designated "door holder" for this meeting, so after it was all setup I had to stand at the door (which normally requires a code) and hold it open. This is so the brass can get to the meeting in a more efficient manor.

Our next mission was to show the augmentees how to wash their vans. They were each paired up and assigned to a van. We then made a caravan of all ten vans and drove to the TMP where there is a mini car wash. Pretty simple, but coordinating this and getting everyone there and through the car wash took forever. It was lunch time by the time we finished and we headed back to the office. Once there the decision was made to eat out at K-16 (near Tango) because we had copiers being delivered for the exercise that we had to meet up with.

Special K was my TC giving me directions since he's had plenty of experience with this. We headed out into the real traffic of Korea which sucks anyway, but as I drove I had to make sure both vans were behind me. We did fine until almost the very end. As we were in the bus lane Special K told me to start making my way over to the right lane which I did. I would move over one lane and wait until the two vans behind me were able to follow. Then I would repeat the process. When I was in the second lane from the right Special K said "There it is, there it is, take it, take it!!!" (The exit is unmarked and looks like a driveway which you have to take from the why) I checked my mirror and didn't see anything…little did I know there was an entire bus in my blind spot. I swerved over and was able to make the exit. I heard a bus honking it's horn wildly and heard later that we came very close to being hit. The second van behind me was unable to make the exit (because there was a huge bus in their way). The third van did make it. When we got off I pulled over in disbelief of what just happened. Oh Crap! I just lost a van in my caravan! We didn't even have communications with them. All of them are augmentees that have never even driven in Korea and don't even know where Tango is. To add to it, this highway didn't have many exits off of it.

We had to call SPC Roy and see if anyone had the cell phone numbers of the folks in van #2. (Part of mission prep should have been to get all this information before hand). We met up with everyone at K-16 and let everybody get something to eat while we tried to figure out where van #2 was. SPC Roy was able to call them and told them to stop somewhere and "grab a Korean and give them the phone". They did this and SPC Roy was able to ask the guy where he was, so we could go find them. I left with him in a van and we found them about 1/2 hour later. We then had them follow us back to K-16. Once everyone was back together we headed out to Tango so the augmentees could see the place and see where and how to drive and park the vans. The sergeant pulled me aside and had a little talk with me, then I had to stand next to him pretty much for the rest of the day. I think this was to mention me anytime he talked about driving and safety. (I think there is a reason I chose my MOS as 25B and not a driver).

So I almost had a heart attack today, almost got me and my passengers killed, and wasted half a day with a search and rescue mission. The good news is nobody got hurt and it all turned out OK. I don't even know if I'll get in more trouble or not. I guess we'll see. I'm just glad this wasn't Afghanistan or someplace like that, a van that loses it's caravan could have deadly consequences. I felt like crap pretty much the rest of the day, which turned out to be another long one. I didn't get back to my room until 1900 again, which means no video chatting…just time for schoolwork and checking email/Facebook.

Even if I wanted to drink I can't. During the exercise there is no drinking allowed by any of the soldiers on post. I hear there are MPs out in Itaewon just looking for soldiers to bust. No worries…I don't plan on drinking, just sleeping when I get the chance.

Overheard Quote: "Hell, when I was 28 I was doing things I can't repeat!" (An air force sergeant in our van on the way to the TMP when he found out how old SPC Roy is and that he's already married with a kid).

The fact that you volunteer to drive - makes me proud of you. Especially knowing how driving can cause you 'drivers anxiety' in unfamiliar places.

Keeping my fingers cross that we'll talk / see each other tonight.

Im with the wife on this one, very proud you stepped up and drove. What happened could have happened to anyone, blind spots are the pitts. All turned out well and it sounds like you did pretty good.