Arrival of the Augments - (Korea) Day 84 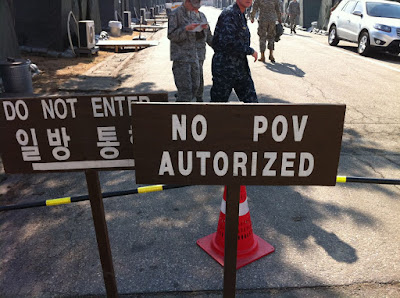 Work call this morning was at 0730. We had to setup for a meeting and then start dealing with all the "augmentees" that were due to arrive. With the training exercise coming up next week our office has been assigned around 20 soldiers from around Korea. They come here and live in a "tent city" in Yongsan for the entire exercise. There are a ton of them that come and do all kinds of things for the exercise, the ones that come and help us are drivers.

The first thing we had to do was pick up all the vans from the TMP. We drove over there (me, our sergeant, SPC Roy, & Special K). We were given 9 vans which each of us had to PCMS, which is basically checking the vehicle out to make sure it's working correctly. After we finished a van full of augmentees arrived to help drive them back to our office. We then had to take the augmentees over to S2 in order to get their security badges. Speaking of S2, I was wondering why the different offices on post and any army installation are called S1 etc. Wikipedia has a great description of all the staff system we use and can be found here. (I've added this in my misc notes for general knowledge as well)

Back to the rest of the day....There was a lot of confusion all day about where all the new soldiers were and getting them everything they needed which was the briefing, their security cards, cell phones, their quarters, and some other miscellaneous stuff. The first group arrived like I stated earlier with a group of 9. The rest seemed to trickle in, which made getting them everything done pretty difficult. We even drove down to tent city at one point asking soldiers who were standing around if they were supposed to be with our office. We ended up picking up two that way. I guess the in-processing down in tent city was really unorganized and a slow painful process for all these new soldiers here for the exercise. SPC Roy and I ended up taking them back and forth to everywhere they needed to go while Special K and our KATUSA held down the fort.

The augmentees ranged from a PV2 to some sergeants. I may have even seen a staff sergeant arrive late. They are basically going to be in charge of the vans we have. Which means they will also have to keep them clean. Each van has a bucket and all the cleaning supplies needed to keep it clean. While dropping a female sergeant off all she kept saying was that she's not going to be washing any cars, she doesn't want other soldiers driving her either because she doesn't trust them (as SPC Roy is driving her around). I feel sorry for the sucker who gets stuck with her because she'll use her rank to make them do all the dirty work while she probably sits around and does her nails. Speaking of sergeants, I have to remember to keep my military bearing when I'm around others that I don't work with. As we were waiting outside for everyone to get done in S2 there was one sergeant that was taking a look at the "superman" phone booth. As he was walking in I said "just don't come out in spandex sergeant". That made him stop and then try and give me a stare down. I blew him off, but it did remind me that I need to remember who I can joke around with and who I shouldn't.

It was a long day and I didn't get back to my room until a little after 19:00. SPC Roy drove right out the gates to pick up some pizza from Pizza School. I was telling him about the pizza I had there last night with the young hawaiian. He picked me up one too and then dropped me off at my barracks. Their pizza is pretty good and it ranges from $5 - $10 a pizza. I shared a bit with my roommate and then did some schoolwork. I hate when I get home so late, I can't video chat with my wife and it just feels like my whole night is shot. I think I have another long day ahead tomorrow, things will be a little crazy until this exercise is over.