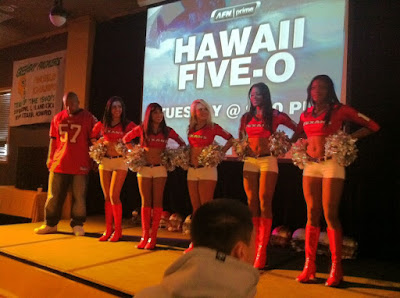 Some of the Houston Texans Cheerleaders for the Super Bowl show


Friday: Friday is a holiday (Lunar New Year) for everyone except those of us unlucky enough to have to work during it. I pulled CQ shift and had to get up, shower, shave, and be in full ACU uniform for my 0900 shift. CQ (Charge of Quarters) duty isn't too hard though so I can't complain too much. The only raw deal is that anyone who does it during the weekday gets the next day off for recovery, I get nothing except the loss of a holiday. My shift is actually in my barracks which is nice (it's either in my barracks or the barracks across the street). I can quickly slip into my room to grab a snack or to relieve myself if needed. I also have my laptop and my roommate's mobile hot spot, so I have internet as well. I sit here at a little desk next to the vending machines in the hall and answer the phone if it rings, which it rang once when I first started (staff duty calling to check and make sure I was on shift). I also walk around the building once an hour to make sure it's not on fire or anything. While doing this I also check the fire exit door on the outside to make sure it's are secure (some folks like to go out it and not shut it behind them).

The shift consisted of a lot of sitting, watching TV shows, checking Facebook, email and watching the movie Punisher: War Zone. I was able to borrow this from the previous guy on CQ duty. It was pretty good, your typical guy flick with lots of fighting, guns, and blood. I had seen the first one a while ago and didn't even know there was a number 2 out. It has the same theme as the first one, the punisher is still out killing bad guys and blowing them up.


Saturday: The CQ shift finished at 0900, well a little after 0900 since my replacement was a little late. By that point I couldn't see straight. I just turned everything over to him and went straight to my room to pass out. I stuck in my ear plugs and pulled my beanie over my eyes, then fell asleep. I slept until 1700 which kind of sucked because most of my Saturday was gone. I got up and took a nice long hot shower. It was so hot in fact that when I came out the steam set off my smoke alarm. I had to rip off my towel and wave it back and forth to get it to turn off. I'm just glad I was in the room by myself…here I am naked waving a towel back and forth. It seems that every 4 day weekend when the Koreans leave post, our barracks lose all heat. We can turn it on, but only cold air blows out. (the reason I was taking a hot shower…just trying to raise my body temperature a bit)

After that I took off to the food court to get some dinner and download some shows. Until I see where I am on my bandwidth limit, I don't want to do that in my room anymore. The young hawaiian called and asked if I wanted to go to the gym and I said sure, sounds fun. I met up with him and we played a little one on one (the old man beat him every time). We then lifted some weights. I just followed him and did everything he did. I got a great workout and then went back to my room to watch some shows.

Sunday: Slept in and woke up with pain in my left shoulder. I think I over did it a bit with the weights. At the time it seemed fine, but now I can't even lift my left arm up without pain shooting through my shoulder. Oh it hurts…it hurts. I tried calling the young hawaiian, but there was no answer. I gave up after a while and just video chatted with my wife for a bit before heading over to a guy's barracks that I met in Korean Drivers Ed. They have a nice day room with an awesome 60" Sharp Aquios TV. The nice thing about having AFN is that all the pay per view fights on the UFC are free! We watched UFC 126 which had an amazing knock out in the main event. I know where I'll be from now on for these events.

We had planned on going up to Seoul Tower in the afternoon, but it was foggy and PV2 Pickle said he was totally broke. I guess we'll try again another day. I finally heard back from the young hawaiian, he went out last night and didn't return until 0830 this morning with his KATUSA roommate. The bars and clubs never close here, so I guess it's easy to do. I'm just a little too old for that…well a lot too old for that. Which reminds me of the guy in my Korean drivers ed class. He is married too and here without his wife. He asked why they just cant send unmarried soldiers here. "It's like a paradise for unmarried soldiers. The bars never close and there are hot chicks everywhere". That is probably exactly why they don't want all unmarried soldiers over here…lol

Monday: (Superbowl Holiday) Yes it's true, we get the day off for the Superbowl here in Korea. Since we are a day ahead it actually falls on a Monday. I woke up at 0540 and headed to The Main Post Club for their Superbowl party. They had free breakfast where I filled my plate as full as possible. I'm used to only having a pop-tart or oatmeal, so this was a treat. They had a small band consisting of soldiers as our pre-show entertainment. After that we watched the game on a big projection screen. There were a number of Houston Texans cheerleaders wandering around and signing little posters they gave out. There were also door prizes that were given out at half time. The guy sitting right next to me won a 46" flat screen TV…so close, but I didn't win anything. I did have fun though, never thought I would have to get up so early to watch the Superbowl! They had the bar open and plenty of people were already drinking by 0730…way too early for me!

After the game I went back to my room and took a nap. I then video chatted with my wife and did some school work. This class is almost over, it can't end soon enough!! The rest of the night consisted of more TV Shows and just relaxing. Back to the grind tomorrow.

Overheard Quote: "You may hear growling and hissing" (The CQ guard before me was briefing me on the nights activities and apparently there are some cats on base that like to mate behind the barracks)