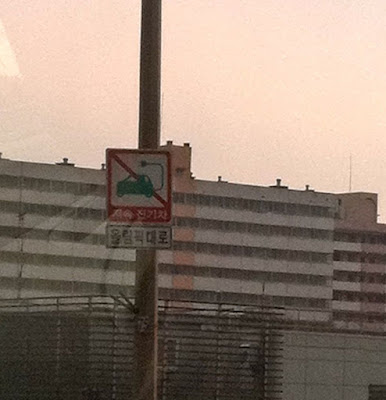 An odd sign on the way to CP Tango...I guess they don't like electric cars here in Korea

Work call this morning was at 0700. We didn't setup for a meeting like we have been the last few days. This morning we just made sure all the augmentees were ready and then headed out a little earlier than normal. We left in two groups again, but were told we can't use the bus lane. When we arrived to the freeway and saw how bad traffic was we immediately got a call on our walkie-talkie stating that we would indeed be using the bus lane. The traffic in Korea is just crazy. It's so busy all the time and if we didn't use the bus lane, then it would have taken us hours to get to CP Tango. Our convoy made it to the bus lane which is the only lane that really moves. We had four vans in our group and this trip went without any issues.

When we arrived at CP Tango the augmentees practiced driving down the tunnels into the mountain and simulated a pickup or drop off. Once our sergeant was satisfied we headed off to K-16 for lunch. After lunch we headed back to the office. SPC Roy and I took our office car to the TMP to have it "checked-out" to us again for the week. This time he had me do everything to make sure I could do it all. It's basically just gassing it up, washing it, then having an inspector sign off on it. After that we get a new weeks worth of paperwork and we're good to go. SPC Roy was in a hurry and was hounding me the entire time while I was driving. He's Korean and has driven too long in Korea I think. He wanted me to speed on post, run red lights, honk my horn. He was going nuts!

When we got back to the office the MPs were all over the parking lot towing cars and putting boots on cars that were all illegally parked. Some folks are going to be in for a surprise because people have been parking all over the place. I then headed over to the company with my financial paperwork because I'm still getting charged for food. When I got there I found out that my separate rations was being denied. This is paperwork that has been going back and forth since I got here and now I guess they are not allowing hardly any to go through. This really sucks because if they would have done it right in the first place I would have almost an extra $300 a month, now I'm just screwed. Because of the hours of my job I hardly have time to make it to the DFAC to eat. In fact I've only eaten there once since I arrived here and that was back when I was in reception.

I headed back to the office to clean up and pack up supplies for the exercise. I got back to the barracks after 1800, so no video chatting with my wife…grrrr. Then later on I get a call telling me I may have to work on Sunday WTF? I'm beginning not to care for this exercise too much. At least I get to sleep in now...well after I do some school work.