I finally have access to my computer for a few days, so I thought I would give my wife a break and add some updates myself. Until she gets back home and receives some of my previous posts there may be a few days missing
Last night PVT Wal-Mart asked if he could have my fire guard shift...no charge. I couldn’t argue with that LOL. He wanted the extra time to clean his rifle before it was turned in. So I got a good night’s sleep!
After waking up and getting ready, we were rushed through a duty food breakfast in the CTA. Have I said I really hate being rushed through chow? DSs yelling the whole time “Hurry Up! Hurry Up! .. You’re Done!” I’ll be so glad to get outta here just to get away from that.
When we finished eating, we headed out to a field to rehearse for graduation. We ran through the process twice and then headed back to our bay. We had time to do a quick cleaning of our rifles before turning them in.
We were in for a couple of surprises when we headed down to turn in our rifles. The first surprise was that once we got in formation, we had to wait for an hour and a half. The epitome of “hurry up and wait”. The second surprise was unlike our machine guns, this inspection for our rifles took about 5 seconds. A corporal glanced down the barrel and our bolt, then told us to put it back together. We then filed into the supply room and read off the serial number. Once they checked it off we were done. All that waiting (and so many hours of cleaning) for a 30 second process.
News: PVT Home School will not be graduating with the company. He was unable to pass the PT test, so he will be chaptered out of the army.
After lunch we had rehearsal for family day. This rehearsal actually took longer than the graduation rehearsal. We had to go up all the stairs towards our bay, then come out to the CTA making our grand entrance...then we did it over and over again. We also had to practice putting on our berets really fast....and without a mirror LOL). Everyone was having some issues because we haven’t really worn them (except for pics and forming them on our heads)
Haircuts were next on the agenda for the day. While we were there, we were able to get milkshakes. Since I didn’t get one the other day and I wanted to celebrate the end of basic training...I got an extra extra large Oreo milkshake. It was beautiful. I am now bald and full.
We headed back to the bay to clean. We took a break for dinner and then came back and cleaned some more. We moved all the beds and lockers to buff & mop the floor. We are also supposed to be almost completely out of our locker and living out of our duffel bag.
When we were done cleaning for the night our cool DS and our senior DS just hung out and talked with us. They talked about this cycle, who the favorite DS and worst DS were, among other stories. They also wanted to know what kind of things happened that they didn’t know about...assuring us of no negative consequences. It was actually pretty cool and there were a lot of laughs from both the DSs and all of us as stories were told. At one point our senior DS took a plastic garbage bag and fashioned a diaper out of it. He then made PVT Colon Jr. put it on and taped it so it was airtight on him....all because he kept farting. If only I could have taken a picture of that.
Once story time was over our cool DS hooked his laptop up to the projector and speakers, so we could watch the movie “From Paris with Love” staring John Travolta. A pretty good action flick...bang bang shoot ‘em up entertainment, perfect for a bunch of soldiers. We did notice that when John Travolta used his AT-4 to fire a rocket at the bad guy’s car, he didn’t perform his safety check and didn’t say “back blast area clear”...LOL
We finished at 11:30, so I took a quick shower and now I’m going to bed. Tomorrow is family day!!!!!!
Random DS Quote “It has the texture of oatmeal” (A statement our senior DS told us that he made to the first sergeant. Our Senior DS evidently took a picture of his “capital dump” and sent it to the first sergeant. The first sergeant showed it to the other DSs at lunch and one of them gagged and was unable to eat anymore)

It turns out that after talking with PFC Metal, he had snapped a few pictures of the "diaper incident". Of course I asked him to send them to me so I could post them! (See Below...yup that's me sitting on the floor in the photo) 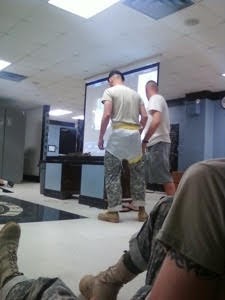 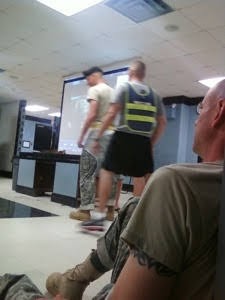