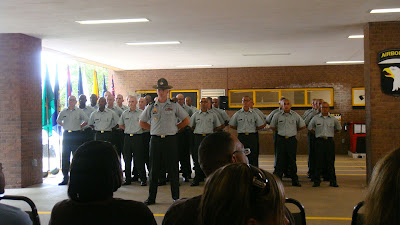 A picture my wife took of our platoon forming up in the CTA on family day.
I'm the bald white guy behind our DS

I finally have access to my computer for a few days, so I thought I would give my wife a break and add some updates myself. Until she gets back home and receives some of my previous posts there may be a few days missing
Today started off very early. Our cool DS woke up everyone at about 1:45 AM and had us all stand in front of our bunks. I was a little disoriented and thought is was actually time to get up. For some reason there was a guy missing from his bunk. He decided in the middle of the night to get up and move to the other end of the bay and sleep in an empty bed. Once he was “found” we were allowed to go back to sleep.
We had to wake up at 5:00 AM and got ready in our summer PTs. We did family day rehearsal a couple more times, we were then told we look like shit...then we were released until breakfast time at 7:30.
After breakfast we got all dressed up in our class B uniforms. Then we all waited about 30 to 45 minutes in the stairwell until we started the ceremony. The ceremony went off without any issues, then out of the blue I found out that all married couples had to go to a classroom together. So much for getting out of this place ASAP.
We sat through some information on insurance, legal stuff that the JAG office can do for us, and some other information for the health and welfare of families.
Once class was over my wife and I took off and left Ft. Benning....Woohoo! First stop...Mexican food for lunch. 2nd stop the hotel. After a while I was laying down out of uniform relaxing...one might say I was close to falling asleep. All of a sudden a loud high pitched screech assaulted my ears. It was actually painful to hear. This hotel had a high tech fire alarm that will not let you ignore it....it actually forces you out of the building just by the extremely annoying sound.
I grabbed my swim trunks and a t-shirt with some flip flops and headed out of the room hoping that all my stuff wasn’t going to end up in flames. Turns out that it was just some kid in the elevator that pushed the fire alarm button.
Since I had the swimming trunks on we decided to take a dip in the hot tub...nice and relaxing.
We then got ready and headed out to a Texas Roadhouse for some steak. Two great meals along with a number of hot tamales and I was very satisfied.
We headed back to the base with some extra time to spare. We hung out until my platoon had to form up for accountability (we were all there)
As we were heading up to our bay we could hear 3rd platoon did not have everyone...then came the dreaded words from the DS “Half right face....front leaning rest position...move” They had to do a number of push-pus in front of their family because of late people.
We were all laughing a little about that until we got to the bay. Our DS found out PVT Ironic did not have his ACUs for graduation day tomorrow. He packed everything up and put it in his parents car....so we all got smoked for that LOL (he was able to call and have them brought back)
The rest of the night was spent cleaning until late in the night. We had to get everything ready for the next cycle. Now I must try and get a little sleep before tomorrow....then I will never have to sleep in this bay again!
Random DS Quote “If you don’t have sex with your wife 2 or 3 times a day...you’re gay” (Our cool DS explaining how to stay happily married)