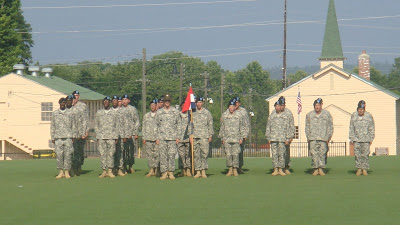 I finally have access to my computer for a few days, so I thought I would give my wife a break and add some updates myself. Until she gets back home and receives some of my previous posts there may be a few days missing
My last day in basic training....seems like I’ve been here for so long. We woke up and assembled downstairs. The senior DS was calling guys names from the entire company to come up and get in a line next to him. I’m not sure what was up with everyone, but nobody was sounding off letting the DS know they were coming. Everyone was warned a few times. When the next person didn’t sound off, the entire company ended up having to do push-ups. Our last little smoke before leaving.
The guys called up were all promoted either from E-1 to E-2 or E-2 to E-3 because of their hard work during this cycle. There were about 10 of them total.
After this we all boarded a bus and headed out to the field where we were graduating. We were given MREs for breakfast (oh yum), so I just ate a muffin and some raisins out of it. Everyone just picked one of two things just to tide them over until after graduation. We then rehearsed the ceremony again and then waited an hour out of sight in some bleachers until it was time to start.
The graduation ceremony was pretty cool. It was hot and I had sweat dripping down my face and chest, but the excitement overwhelmed me. The whole thing was over before I knew it. My wife came out onto the field and I picked her up and gave her a big hug. I said goodbye to a few guys and then we were out of there. We had exactly one hour to check out back at the bay, or else we would have to wait until 22:00 until we could leave.
We got a little lost on the way back. I was starting to get a little nervous, but we made it back with about 15 minutes to spare. After we left I felt a big relief. This chapter is now done.
We celebrated and went out to eat. I had some great blueberry french toast for brunch, then came back to the hotel room to relax and make a number of calls to family. My awesome mother in law had my wife pack some of her lemon cake on the plane with her and brought it all the way here. So I ate that and relaxed some more.
Dinner was all you can eat pizza and dessert was a brownie sunday. I think I may explode! I’m going to have to do some push-ups in the morning. LOL
Random DS Quote “Good job this cycle privates” (Our senior DS right before we headed out to perform the graduation ceremony...one of the few positive remarks ever given to us) 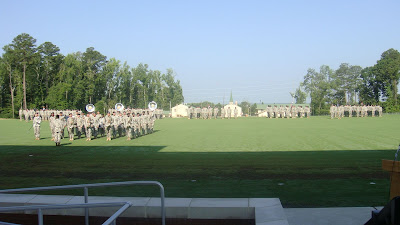 A picture my wife took of the entire company (along with the band) in formation
for the graduation ceremony. 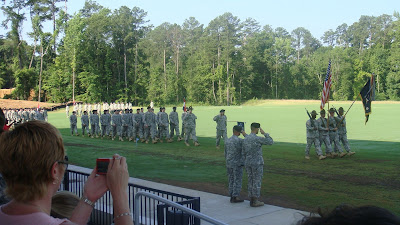