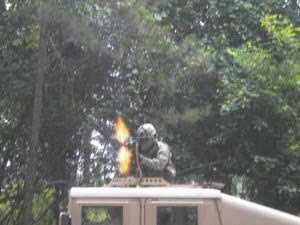 A guy from our company firing (blanks) at the bad guys

These entries are from the letters that Brandon has mailed to me. His writing at times can be a bit difficult to determine his words... bare with me, I do my best, especially with army terms.
Today is the last day of FTX-3, thank God! I had guard duty with PVT Wal-Mart at midnight until 1am. We woke up about 5:18am and started to get ready. Once personal hygiene was done PVT Wal-Mart and I took down our Hooch and started packing our rucks. (Laundry guard is going to be busy tonight).

After breakfast we were able to poke around the hummers that we’ll be in later today. A sergeant gave a safety briefing about the vehicles and then 3rd squad found out our first assignment is guard duty in the towers until 11:00am PFC Metal and I grabbed a tower together. 3 ½ hours later we were relieved and headed over for mission prep.

Mission prep was DS A-Hole showing us in a sandbox what we would be doing. He used little matchbox cars to represent the hummers we would be in. We also did a walk through of our movement in a field. Not long after that we saw the four hummers pull up. We had to wear full battle rattle along with something similar to  paintball mask that attached to our helmets. (This was because we were going to be fired on with special round that were hard plastic). These masks had been used all day and smelled like dirty socks.

We took off in the hummers and were “attacked” about 2/3 of the way to our target. We had to get out and attack the enemy. This involves some running and by the time I got back in the hummer, I was having difficulty breathing with that mask on. I felt like I was being suffocated. I was breathing hard, but no oxygen was getting to me. I was almost to the point of panic and was just about to rip off the mask, then the hummer started rolling out and the breeze from the window helped me catch my breath.

When we arrived to our target we all jumped out and my team ran toward a house. The “insurgents” were firing at us, but I think they were more focused on hitting a DS. (You see, other squads were playing the insurgents.) DS A-Hole got a nice hit in the leg. He said the guy was smiling the whole time. LOL.

We ended up catching the bad guy, but we made a number of mistakes. All in all it was a good learning experience.  When we got back we performed the AAR and ate lunch. There was a bit of thunder so the whole company went to a big field and sat down. I guess there is less chance of us getting struck by lightning out there. Of course we all left our rifles in formation.

Once that had passed we had to use up the rest of the blanks and then got back in formation. As we were in formation as a company a DS let off a smoke bomb. Everyone thought it was a CS gas and took off. The DS made everyone get back and while they were talking to us, a sergeant let a real CS grenade off next to the formation. I think they were just trying to use them all up. That had everyone coughing and running. (All our gas masks were packed). Once the gases dispersed we packed up our rucks and marched to meet the cattle cars to take us back “home”. We had duty food in the CTA and then passed out our mail, but we weren’t allowed to read it until our personal time…grrr, torture. We had inventory all our equipment from the FTX, but before that we got a nice, hot, long over due shower.

FTX-3 is finally done! Was much better than FTX-2 instead of just practicing drills we got to use them in our mission.

Random DS Quote: “Why are your pants hanging down so low? Does that mean you’re available? You know that started in prison, this is almost prison right?” (Our cool DS talking to a PVT. In another platoon whose pants were sagging pretty bad. Our DS said he heard in prison people would let their pants sag to let people know they were available. LOL.) 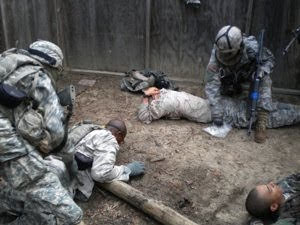 Guys from our platoon searching some "enemies" for weapons or intel 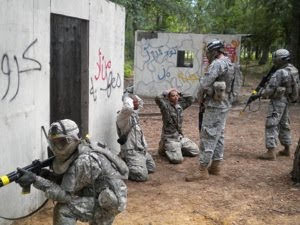 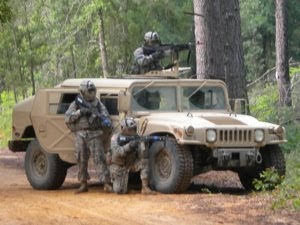 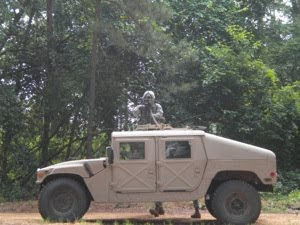 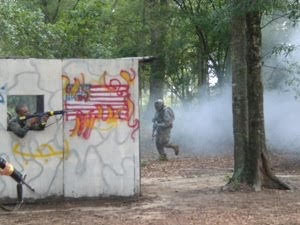 Attacking the village after smoke was put out for cover 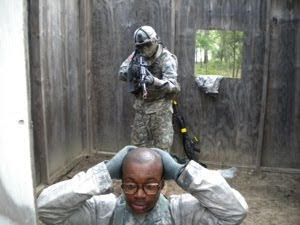 The taking of a prisoner...LOL