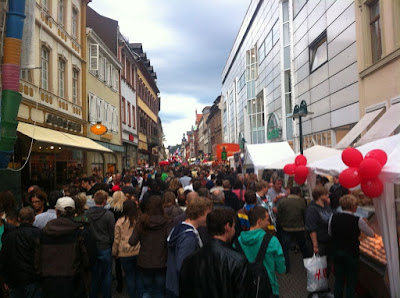 A view down the street during the "Heidelberger Herbst"

Saturday: We slept in and took our time getting ready this morning, then we made the trip to Frankfurt airport to pick up my wife's cousin. He's in the military and going on a deployment, but as luck would have it, he has a one night layover here. We jumped at the chance to pick him up and have him stay with us for the night instead of a hotel. He was going to have to take a taxi from the airport to Ramstein Air Base on Sunday. We wouldn't have that, we said we would just have him stay with us and we would take him there ourselves.

After getting home we unloaded the luggage from our car, then took him out to eat at a local restaurant we've both heard a lot about. Everyone calls it the Schnitzel House, so we found out the directions and checked out the reviews on the web. It's a little off the beaten path, but was worth it. The food was awesome and it was the least we could do to treat family to a nice meal before he leaves for his deployment. He'll be away from his immediate family for a while. I may not have been deployed yet, but I do know what it's like to be separated from family. When you're on your own, it just sucks.

We headed to downtown Heidelberg to check out the "Heidelberger Herbst" (the Heidelberg Fall Festival). The place was packed! While the streets usually have plenty of people on them, they were completely packed everywhere we looked. There were vendors all over the place selling everything from wonderful smelling food to various items or services. There were street performers all over as well. I wish we could have stayed longer, but our guest wanted to be able to video chat with his family.

We came back to the house and he was able to video chat with his family before turning in for the night. It broke my heart watching the video chat, his daughter was getting ready for homecoming and he wasn't able to be there for that. He'll also be missing the upcoming holidays as well as birthdays. All I can say is that it really sucks.

Sunday: We slept in again, then after getting ready we headed to the Rammstein Air Base. We ate lunch there and then shopped around a bit before seeing my wife's cousin off. It was emotional seeing him off. Knowing that we're the last family he's going to see for a while. He gave us both big hugs, then we headed out.

After we got back to the house, I had to use my little portable shock treatment kit that was issued to me during my follow up session with my doctor. This little device can attach to my upper back and neck and give me the same treatment I received while in physical therapy. It really helped a headache that was killing me, as well as the pain that I had in my neck. All this from a little 9 volt battery!

We just took it easy the rest of the day catching up on all our TV shows that finally started up again. I'm at the tail end of a cold, and my wife seems to be just starting hers…so we were both happy to just cuddle up on the couch and relax for the rest of the day with some tea and then soup for dinner.