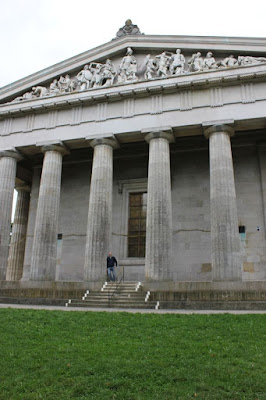 Me standing in front of the Walhalla Temple near Regensburg

Saturday: This morning we woke up and had breakfast a little later than usual since it is the weekend…everyone agreed on 0900. After that my wife and I got ready and then headed off to a city called Regensburg. The owner of the hotel suggested it as a place to see, so we took his word for it and headed off. The drive was about an hour and after a little bit of research on the web, we had some sites we wanted to check out and were on our way.

When we arrived, we ended up parking in a parking garage almost in the center of town. We came up and started walking around downtown to find a maze of small alleyways filled with various shops. One could spend days here just going from shop to shop checking out the various things to buy. We were not here for a shopping spree, we were here as tourists ready to see the sites…but there was a major situation arising…I had to pee pretty badly. I found the tourist information center and promptly asked them where the nearest bathroom was. Once that was taken care of, I was able to think clearly and we started enjoying the sites.

We checked out the Regensburg Cathedral which has two large towers that dominate the skyline. The inside is impressive as well, and there are tombs of past bishops which I was surprised to see. After that we headed out and found a restaurant to have lunch at outside. This is one of the things I love about the European towns that we visit, on a nice day one can sit outside at the many tables and grab a bite to eat. It's enjoyable to people watch and take in the fresh air.

With full stomachs we headed to check out the The remains of the East Tower of Porta Praetoria from Ancient Roman times. It always amazes me when I check out ancient ruins and think back at how long ago they were built. We headed across the stone bridge which was finished in 1146! This ancient bridge was very important back in the day and was used by the knights of the crusades on their way to the holy land.

We spent more time just checking out the city before heading out for a short drive to Walhalla Temple. This huge building is full of famous and historical German figures and is modeled after the Parthenon in Athens. We did have to pay for parking (2 Euro) and then pay for entrance (3 Euro), but it was very impressive. Inside it is full of busts in the likeness of the historical figures and outside it is just massive, with the columns and the large steps.

We headed back to the hotel after that and had another great meal by the owner here. I think the coolest thing about this trip is that we would have never even thought of it unless it was recommended by the owners. I'm glad we were able to make it there and enjoy a city we would have missed otherwise.

Sunday: We had breakfast again at 0900, then headed off to the Grafenwoehr post. I had to do laundry (one of the only downfalls of this hotel is the lack of a washer and dryer). While I did my laundry, my wife shopped at the PX, which is fairly large compared to ours in Heidelberg. We then planned to eat lunch at a wonderful Chinese place called "Tea Garden" off post, but when we arrived we found it closed. They are closed for a month while they go on vacation. This is something you don't see much of in the states. A business usually doesn't just take a month off so they can go on vacation. They have a different outlook on money I guess, and they put more emphases on their own quality of life. I guess this isn't a bad thing, except for the fact that my wife and I wanted some good Chinese food.

We ended up headed back to the food court on post for lunch, then went back to our hotel for a nap. My wife left at about 1500 to head back home and I did schoolwork and then read for a while before eating another wonderful dinner here at the hotel. I'm afraid to get on the scale when I get back home!

Pictures of our day trip...check out the slideshow below or go to the album on my flickr: