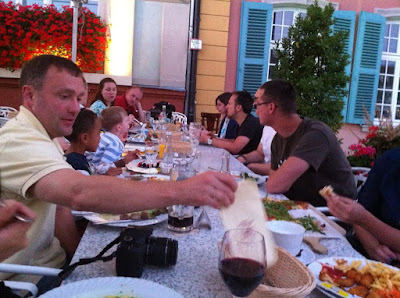 This morning was just one of the many many times that just reaffirmed my decision to get out of the army after my current contract is over with (I think I must say this every other post). We were told we had to be at the PT formation at 0550 because we were doing a battalion run. The season has definitely changed here in Germany, and even though the day may still end up being warm, the mornings are getting a lot colder. We were told to wear our long sleeve PT shirt with our shorts, but it was still pretty cold. We formed up and stood in formation for at least a half hour…just standing there, waiting…standing and freezing. Finally everyone got formed up and ready to go. The leaders came to the front and started the getting everyone stretched after having those of us on profiles head to the back. The sergeant major then came back and asked each person why they weren't running. He made all those on "run at your own pace and distance" go back and join the group saying they had to do exactly that…run at your own pace and distance. The rest of us walked to the gym and worked out.

When we came back the leaders stated how they thought the run was great and even some of those on profile did a good job keeping up. On this point I have to disagree. If a person feels they can indeed do the run, then by all means let them do it. I think there were some that were pressured into doing the run even though it meant running through the pain. Doing that is just stupid. If your body is in pain, it's trying to tell you something…and just ignoring it is going to make it worse. We then had to hear a safety brief from the battalion commander for the weekend. It contained the usual…don't drink irresponsibly, don't beat your wife, don't do stupid things. He then asked the battalion command sergeant major if he had anything. Of course he does, he's an NCO…so he adds his input, which is almost exactly the same thing (drink responsibly, don't beat your spouse, don't do stupid stuff). We then get released to our company commander who in turn gives us his safety brief which is all the same stuff. He asks our company first sergeant if he has anything to add…of course he does! He then proceeds to say the exact same thing. We're standing out in the cold listening to the same thing over and over and I'm thinking I'm going to go nuts just watching the time go by and my available time to get ready shrink by the minute. It's this kind of stupidity that I absolutely hate about the army.

Everyone had until 0930 to be at "Days of Excellence" which was being held on PHV at the theatre. I of course have to get ready a lot faster than that, because I take my wife to work by 0830 each morning. I then had a knee exam scheduled today before we found out about the Days of Excellence, so I was allowed to keep my appointment. I headed to the appointment, which was great…that meant I was going to miss "Days of Excellence"! The knee exam was a huge disappointment though. My doctor just moved my knee in a couple directions and said oh there's no ligament damage. My X-Rays show a little degenerative evidence on my knee cap, so she said I'm just getting old and I have to deal with it. I know something's not right with my knee, it's throbbing every day now and I can't even keep it in one position for a long period of time without being in pain. Then at random times I have shooting pain…but it's all just because I'm getting old and I have to deal with it. There has to be more that can be done, I was a little frustrated leaving there. I did get some pain medication refilled, but that stuff doesn't seem to do much of anything.

I headed home and changed into my uniform (I had to be in PTs for the knee exam). I grabbed a snack and waited a little bit before heading to then end of "Days of Excellence". For those of us that live on PHV, we went to a Town Hall meeting on the closure of the base. It was open to anyone and they went over pretty much everything we already knew, PHV will be closing by August 30th of 2013. Sometime between now and then everyone will be moved to their gaining units. Most of it will be done after June because they don't want to interrupt those with children in school. The other message put out was that everything they do this year will be the biggest and best ever…they want to go out with a bang. Unfortunately the meeting went until 1300 and I was starving! When we left we were released for the day. As we all headed out the sergeant major was there and told everyone to go back in and get a flu shot. I ended up pretending to go back in, but then headed home instead. The problem with flu shots are that I don't really believe that they protect you from the future flu season. Also we will be required to get one at a later date and have it recorded in our records, so those who went back in to get their shot are likely to be required to get another one in the near future.

I headed home and ate lunch. I then headed into the office in civilian clothes where I met my boss. I had to print off a couple items to take to class this Sunday. I then headed home and took a nap. I passed out and didn't wake up until I went to pick up my wife at 1600 from work. Later on we met up with my boss and a few other people from the office. We headed out to a brewery (and restaurant) in Schwetzingen, a city only a few minutes away. It was basically an unofficial good-bye to SPC Whirlwind and his family. We all had some good food, good beer and good conversation.