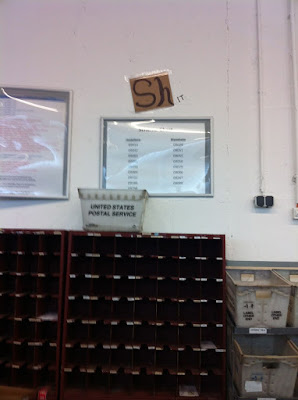 The Mannheim Mailroom Center...someone has a sense of humor

This morning PT was football for those not on profile. I do like that they are now starting to mix up PT a little bit. If you can get a good workout and have fun doing it, that has to be the best way to do it. I headed over to the gym with the profiles and used the weight machines. I had a good workout, even though it wasn't playing a sport, I enjoy heading to the gym where I'm inside listening to my music. I get a good workout on my own without having to deal with all the extra crap that the company always has to go through. I was reminded of this on my way back from the gym as I saw everyone getting in formation and going through the stretching cool down. It's all just so formal and a waste of time in my opinion. I stretch out and get everything done quickly, whereas when doing it in a formation takes a long period of time.

Yesterday our office was looking for someone to work in the mailroom for the week. The person that they were asking stated that it hurt his back to stand too long. I volunteered to do it. Normally I don't volunteer for anything, but working in the mailroom is not a bad gig. For a week I will get to come into work in civilian clothes. This means I don't have to worry about wearing a hat every time I go outside and I don't have to worry about an officer sneaking up without me knowing and having to salute at the last second. Ironically you also get a lot more respect in civilian clothes. If you are in civilian clothes you are treated differently. Those in the military don't know if you are actually a civilian, or if you are enlisted or an officer just in civilian clothes. There are a lot of times where NCOs or officers see I'm only a specialist and all respect goes out the window.

Time in the mailroom also goes by pretty quickly. Even though I know I'll be working until 1700 for sure each day instead of the chance of getting off sooner, the day will fly by. I started off the day sorting mail into folks boxes, but was quickly pulled to head off with one of the civilian GS employees. He remembered me from the last time I was there and asked me to ride with him to Mannheim. The conversation on the drive there was interesting. With Heidelberg closing in the next year, all the mailroom employees are trying to scramble to find new jobs. There are only two actual full time GS employees. These two will get priority placement which means the government will offer them a job somewhere when theirs disappears. For everyone else, there is a lot of stress involved at the moment. Even for those who will get the priority placement, there is still some stress because the job they are offered can end up being pretty much anywhere. We arrived in Mannheim and I was reminded of the time I worked for UPS, but on a much smaller scale. A semi pulled up and they started unloading mail onto a conveyor belt, where we kept an eye out for packages heading to Heidelberg and grabbed them. We had another conveyor belt that led up to our truck and sent all the packages and bags of letters to it.

We left and on the way back to Heidelberg I noticed traffic start to slow from what looked like a taxi that had pulled off to the side. At first I thought it had broken down, that is until we got closer. As we passed I saw the passenger had the driver pull over so he could take a piss on the side of the road. I guess when you have to go, you have to go…traffic be damned!

By the time we got back and unloaded the truck, it was time for lunch. I ate in my car and listened to music. I headed back into the mailroom and worked the front desk, which is basically only getting people's packages when they bring up their notification slip. This can come and go in spurts, so I would surf the internet for a while to pass the time during the slow periods. The most common comment made all day long…"What the heck did my wife buy now?"

I got off at 1700 and picked up my wife from work. We both are starting to feel a little sick..scratchy throat and such. I started popping vitamin c and we both had soup for dinner. I'm hoping this comes and goes quickly!!