Saturday: Woke up at 0640 so I could video chat with my wife for a bit before leaving for the paragliding tour I signed up for. I caught the bus at 0800 and we stopped by K-16 to pick up a couple more soldiers before heading to a place about an hour or so farther south. It's a small world…on the bus was a platoon sergeant of mine from AIT. She was just a total bitch back in AIT and I thought it may bring the whole trip down a bit..and she sat almost directly across from me…ughhhh.

When we arrived, we waited at the paragliding school for about a half hour and then paid our money. It turns out we can also purchase a movie for an extra $10. The tour guide loaned me the money since I only brought what they stated it cost. We then walked over to a field where all the landings would take place. A truck then started taking people up a mountain 3 people at a time. I was in the third group, so I got to see a few landings before heading up. There is a lot of waiting and anticipation because it takes about 15 minutes for them to drive the people up, and then about 10 to 15 minutes for each flight down.

While waiting the former AIT platoon sergeant started talking to me. Surprisingly she remembered who I was and asked where I ended up and what I'm doing. It's very strange, she was talking and smiling and actually very nice…a total 180 degrees from back in AIT. I guess even the NCOs hate the TRADOC environment. So now she turns out to be a nice person, who would've thought!

So it's my turn to head up and we all stuff into this truck and head up the mountain. We drive up on a narrow road that looks as though it's been washed out a few times. It feels like we're going on a four by four expedition. We just keep going up and up and I keep looking wondering if we're going to fall of the edge of this road or not, or if the truck is going to get stuck. Surprisingly we make it to the top and all unload. The chutes are all in the back and we all get strapped into our gear. We wear what turns out to be a seat (and butt cushion for the landing) that gets strapped to the professional that drives this paragliding contraption.

I hear a guy ask what I think is "Who's first time here", so I raise my hand. What he actually said was "Who wants to go first?". So before I realize what's going on I'm strapped to a guy and being told these important instructions "When we say go, start running and don't stop!" This is probably the scariest part because I'm at the top of the mountain and there is only a short distance to run before it falls off sharply. I'm wondering how long it takes for me to start gliding…am I going to end up not getting enough air…am I going to end up tumbling down this mountain with a Korean stuck to me???

Then the moment of truth arrives…I hear them say go! I start running but only get about two steps before I'm actually only running in place and not moving anywhere. Before I know it we are up in the air and gliding! The entire experience from this point on seems surreal. The view is awesome and you just hear the wind. It's just an awesome experience! We made our way around and during this time I was holding their camera on a rod that is connected to me with a safety strap. I'm taking video and then the instructor changes it to photo and we take a couple pictures. We then prepare to land and come in very smooth. The only thing I would change is I would take some motion sickness pills before hand. It wasn't bad, but it did take me a little while to stop being a little woosie.

Most landings for the day were smooth, but there was a couple semi-hard landings along with one that didn't even make it to the field, instead they landed on the bank before the field and then tumbled into the creek that ran below. The lady that was on it hobbled out and had a pretty bad twisted ankle, but that was the only injury for the day.

We then loaded the bus and ended back on post a little after 1600. We're told they will get in touch with us about the video and photos. Hopefully it turns out pretty good. I headed to my room and did laundry while watching an episode of Breaking Bad. I then took out PV2 Charlie to Itaewon just to walk around and people watch. He's under 21, so no drinking for him. He hadn't been off post yet and has been here two weeks. I felt pretty bad for him. PFC Pickle also came along just to get out and do something. We walked up and down the strip and then we also took him up one of the side streets to show him all the places that are off limits. These include a number of suspect establishments with scantily clad women at the doors trying to beckon you in. He assured us he will not be going back there. After a couple hours we head back to the rooms and call it a night. 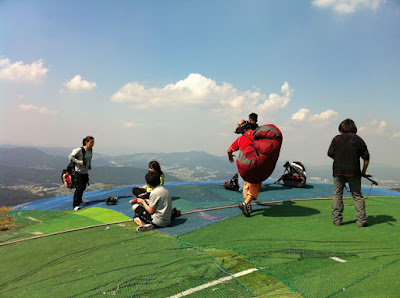 People prepping the equipment for take-off 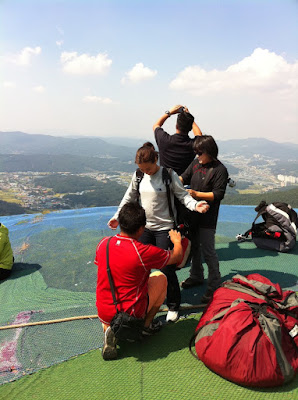 Sunday: I wake up around 0830, get ready, go to Starbucks, then head to PFC Pickle's room to watch UFC. It was a pretty good card with Jon Jones vs. Rampage Jackson as the main event. Jon Jones is a machine and has beat everyone he's come across with ease. As much as I like Rampage and hoped he would be different deep down I knew he would not win this fight unless he got a lucky punch in. Such was the case, Jon Jones picked Rampage apart and won the fight.

I then headed back to my room and video chatted with my wife for a while. After that it was an episode of Breaking Bad, then some work on a Windows 7 SkillPort. I also did a normal SkillPort just so I can add some more hours. I watched the new CSI and then headed to The Point to go work out with PFC Pickle. It was nice to get back to the gym after not going for a while. Since getting sick I stopped going so my body could rest and I could get better.

I ended the night by watching an old classic movie "Conan The Barbarian". I remember watching it many times as a kid and loving it. It was still fun to watch it once again after all these years.