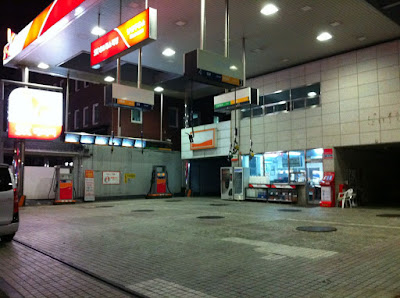 A gas station I passed earlier while in Itaewon with hanging nozzles...
interesting way to save space.

Work call this morning was at 0630. We arrived and setup for a KUB in the top secret conference room. Our new guy PV2 Charlie was here so I had him come along to see what the majority of his job will be…a glorified bus boy.

Since it's the start of the week I checked my promotion point status:

OMG I'm so freaking close to maxing this portion out…it's killing me! I only have 20 more points to go, or 98 hours depending on which you look at. I'm hoping to finish it soon!!!!

I then started helping PV2 Charlie in-process. There is a lot of stuff that has to be done for all the in-processing. The first thing we did was have our admin office make him a badge, so he could come and go from the office without having to check in and give up his ID card every time he came in the building. Next stop was the company and then we started at some of the places at battalion, but took a break for lunch.

At lunch I headed to my room and video chatted with my wife for a while. Once back at the office we continued PV2's in-processing. We were able to get his mailing address setup and some more items at battalion before we called it a day. We didn't get it all done because at one point we had to head over to our supply office. I had to help a new supply KATUSA with his network account and getting his email setup. This was not a problem, but our supply sergeant I think gets pretty lonely over in her office, and you can never just get in and get out because she is a talker. She met PV2 Charlie and talked and talked and talked.

We headed back to the office around 1600 and cleaned up before leaving around 1630. Normally I would have gone to work out, but I'm still not feeling very well. I have a pretty annoying cough to go along with a cold that I just can't shake. I've been hydrating and taking extra vitamin c, but it's not going anywhere. I headed to the shoppette to purchase some more OJ and vitamin water as well as some cough drops.

I then headed back to my room where I finished my last day of school for this year's TA. I used all of my TA allotted to me for the year which is great. I'm going to take a little time off to now study for the Windows certification coming up. I was pretty tired from being sick I guess and also getting up early, so I took a nap. After the nap I watched some TV Shows (CSI: Miami & Breaking Bad), then did a couple SkillPorts.