So after I decided to go to sleep last night a little after 2130, there was a loud banging on the door. I didn't hear anyone say anything like "get out of your room", so I proceeded to go to sleep. I heard the pounding on all the doors and on mine a couple more times. I just went to sleep. I'm not sure who or why, but I did hear that there was a "GI Party". (where everyone has to clean). Why they would do this at bedtime I have no idea, but I'm glad I didn't go out. I really hate living in the barracks.

This morning I went on a Korean cultural tour. We met up at 0830 and took a bus to Kyung-Bok Palace. It was actually the same palace I went to my first weekend here in Korea. I didn't mind though because we had a different tour guide and we were able to look at some different areas. We then headed to the Korean National Folk Museum which is right next to the palace. I had been there too, but on an unguided tour. We were guided this time though a part that I didn't even visit last time around. Both tours were very informative and fun to go on.

We then headed off to lunch at a traditional Korean restaurant. We all sat on the floor and were served what seemed like a never ending steam of dishes. I tried a lot of them and by the time we left I was plenty full. After lunch we headed out and were turned loose for a couple hours to shop in an area called Insadong Street. There were a number of various shops all over the place. I was battling a fierce headache, so all I really wanted to do was take some aspirin and lay down somewhere. Sometimes when I work out pretty hard, I'll get bad headaches the next day. This was the case today and in Korea they don't sell aspirin at any local convenience store, you have to find a pharmacy in order to purchase any pain relievers. I did some walking up and down the streets and went into a few shops. I want to buy stuff for friends and family back home, but I just couldn't decide what to buy…nothing was really jumping out at me.

We finally all met up again and boarded our bus. Our next stop was Changdong Theatre. The program said we would be seeing a traditional Korean play, but it turned out to be the exact same play I saw on the last cultural tour. I'm not complaining though, the play was still great the second time around. I'm thankful for the opportunities I've received to be able to go out and do stuff like this.

After the play and on the bus ride back, I received a call from my NCOIC. She asked if I'd like to go to the Linkin Park concert tonight. Her husband was not going to be able to make it and I jumped at the chance. I had wanted to buy tickets earlier, but nobody would commit to go with me. This worked out perfect! As soon as we got back to Yongsan, I got off the tour bus and headed straight to the subway to meet up with my NCOIC. We headed to the show and had a blast. Since "Mr. Hahn" (the DJ in the band) happens to be Korean…he was the most popular guy in the band. Every time they would show him on the big screen the crowd would freak out.

I got back to my room around midnight and showered right away. I knew I had an early work call the next morning, so I got in bed as soon as I could. The problem was that I didn't fall asleep right away. It may have been that my roommate was Skyping with friends and I could hear him talking, it may have just been that I knew I only had a limited amount of time to sleep so I would get frustrated every minute I stayed awake…but whatever it was, it took me quite a while to actually fall asleep. It had to be after 0100….Ugggghhhh 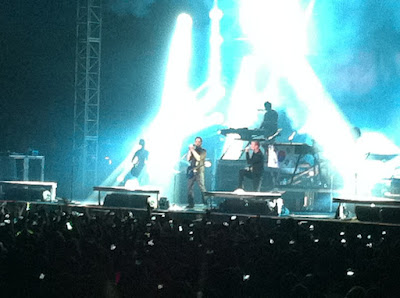 A photo I took during the show, you can see the Korean flag next to the DJ.