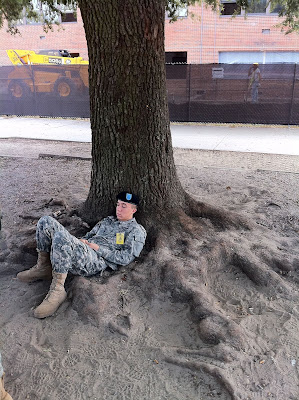 Outside of the medical clinic I saw some random soldier asleep.
That can't be comfortable!

Today’s PT consisted of circuit training. Normally circuit training is a piece of cake and all is well, but today we had the very de-motivational sergeant that has come a few times in the past. I swear this sergeant is the worst one on post. He is just horrible. Everyone hates this guy. So my day started off pretty crappy just dealing with this sergeant and it made me start off the day demotivated. It was one of those days I just didn’t feel like doing all the army things...I just wanted to hang out in my room and maybe watch a movie or two.

Class was pretty boring in the morning...so boring in fact that PFC Metal created a projectile weapon out of his mechanical pencil. He then became a sniper and started shooting people in class which was pretty funny. The things we do to entertain ourselves...lol

After lunch me and all the others in our class that are going overseas (with last names starting with M-Z) had to go to the medical clinic for shots. We arrived and were given a small brief to let us know what we needed to do. I had to go to the lab for some blood work. I then had to get smallpox, typhoid, and anthrax shots. The smallpox shot will end up turning into a blister on my arm and then fill with puss. It sounds pretty crazy what we have to do after this shot. We have a bandage that we leave on for three days and then we change it daily after that. We are supposed to take the used bandage and put it in a baggy with some bleach to keep it from spreading. We also can’t be around kids under 1 year old and a host of other warnings and precautions. Holy Cow! We have to go back in a week and have it checked out. Right in the middle of this with about 40 people in the clinic they had a fire drill of all things. We all had to go out wait for a specified period of time before going back in.

After we finished at the medical center the young Hawaiian and I went to the IET center. There wasn’t enough time to head back to the schoolhouse, so we hung out in the IET center for a bit and then went to the DFAC to eat dinner.

Tonight we had yet another mandatory training. It was the last in the series that we’ve been doing for the last few weeks. This one had to be the best though! We learned how stress is bad for us and how to deal with it. He had everyone close their eyes and take some deep breaths, it was the first time during training we could close our eyes and relax without having to worry about a sergeant yelling at us....lol

We were told after training that Charlie doesn’t have any PT tomorrow, instead we have some sort of accountability over at the company. All we know is that we have to be in ACUs in formation at 4:30 in the morning. I’m glad we don’t have PT because my right arm where they gave me the two shots is pretty sore, it hurts every time I move it.

When we arrived back at RBK we found out we have a formation tonight at 20:30. WTF?? I hate living in barracks! I hate having my personal time taken for granted by whatever NCO needs his ego stroked. It turned out after we all formed up that it was the same exact message we just heard at the training we just came from. (We will not be doing PT and will need to be in formation at 4:30 in our ACUs). What a waste of time.

Overheard Quote: “Wow look at that bubble up! Don’t worry, that’s normal. Even if it wasn’t we would say it is” (The doctors who were giving me the anthrax vaccine said this after they gave it to me.- My arm started to bulge out where they gave me the shot)