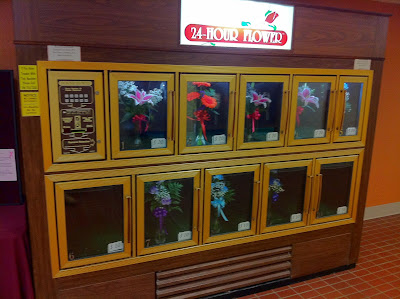 Walked by this at the hospital on base...I've seen a lot of vending machines
in my time (I've even owned a few), but I've never seen a flower vending
machine. Insert $20 and get flowers for your sick loved ones at the hospital...lol

No PT this morning...this is starting to sound like a re-occurring theme now. I had all good intentions to do all the pt this week after missing so much last week. Turns out that we have a lot of stuff to try and take care of before we leave here and I’d rather try and get them done early before school so I don’t miss any. We are also required to have a battle buddy at all times, so when one person has an appointment two people have to go.

This morning I went with PFC Metal to the hospital so he could get his ears checked. I also tried to get my glasses ordered at the same time, but that didn’t work out. Turns out they only accept walk-ins for glasses on Mondays and Wednesdays @ 13:00 now. So this means I’ll be missing some school. After we finished up, we went to the Starbucks that is located near the exit and then called a taxi. The hospital is actually quite a ways from the school house and although it is walkable, we wanted to make it to class on time. We arrived while there was still the formation in front and had the cab driver drop us off on the side of the school house. I think he wanted to pull right up in front of the formation and let us out...that would not have turned out very well.

In class today we did another practice exercise that took the entire day. We use the Cisco Packet Tracer program to setup a semi-complex network.

I’m still feeling a bit sick, so I took some more TheraFlu. That stuff has been working awesome, but I think there is only enough left for a morning dose. I’ll have to see what they have at the shopette tomorrow.