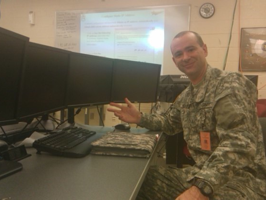 Me showing off this high tech setup in our BCCS classroom. The only
problem is that we never even used these! Instead we used little
laptops that we placed in front of the big screens. I hear
these will be used in some future class that we will not see.

So this morning we had to wake up a half hour early (4:00AM), but we didn’t have PT. Instead we marched over to Charlie and then separated by active army and national guard & reserve. We all then formed up in alphabetical order and marched up the street to the ops building. Once there we filed in and showed our dog tags, our ID and then initialed on a piece of paper next to our name. That was it, we then went to the DFAC and ate breakfast. After breakfast we had plenty of time before school, so me, PFC Metal and the young Hawaiian went back to the Charlie day room and tried to nap. It turned out to be pretty tough though because there were people coming and going and being noisy.

The morning portion of class was all review, which was good because I missed the entire second part of the day yesterday. I was able to catch up on everything I missed thanks to my neighbor PFC Metal who answered all the questions I had.

We then went to Charlie during lunch time and went over notes before eating lunch. After lunch we tested out of BCCS. I ended up leaving after I took the test because I had to be the young Hawaiian’s battle buddy for a dental appointment he had. (I found out later in the day that although I didn’t get the highest score in the class, I did score a 99% which is good enough for me!)

The young Hawaiian and I went to the dental center and on the way over he told me that the old Hawaiian is finally going to be able to go home this Friday. He’s been wanting out since he cannot be a 25B, so we’re happy for him. It’s just too bad that we can’t go out this weekend and give him a proper send off. While waiting for the young Hawaiian I fell asleep in the dental waiting room. A sergeant walked up to me and asked me what I was doing. By this time the place was closing and I was the only person left in the waiting area. I looked around and saw the young Hawaiian with an assistant signing out and said “I’m just waiting for him”. The sergeant said “Don’t fall asleep in here” and then promptly walked out. That was a close one...lol

The night was our normal night consisting of dinner at the RFAC and time spent at the library. I made use of the library computers because they have a CAC reader (our ID card is called a CAC card and actually can be inserted into the computer for ID purposes to get onto some government websites). I was able to transfer my security+ certification information to the army finally. I will probably need to get one of those readers eventually so I can use it on my laptop. That will make things a little more convenient.