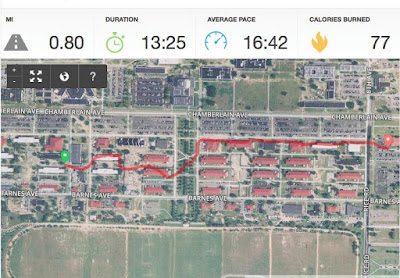 I thought it would be interesting to map out our walk from the company to where
our training was. I used the runkeeper app on my iPhone. I was just curious
how far it was (.8 miles and we walked pretty slow...lol)

Had hall guard shift at 3:30 this morning until almost 5:00 because of the extra stuff that the last shift has to do to get ready for the morning. Technically sleep wise it may be one of the better shifts because you get to sleep through the night. It is a longer shift though. The extra duties aren’t much as I found out (this was my first time doing it). We had to do the wake up for everyone which consisted of going down the hall and flipping on everyone’s lights at 4:30 AM. We then had to take down the PT gear and fill up two of the coolers full of water. We had to go to the RFAC and get two bags of ice for the other two coolers and fill them up with ice and place the ice sheets just in case there is a heat injury during PT. Somehow I doubt this will happen today because it’s cold out!

We dressed in winter PTs this morning because it was freakin’ cold out there. We wore our sweat pants and long sleeved shirts. We also had to wear our IBAs and take our rifles out with us. We ended up doing a circuit with each station having a specific exercise for us to do with our rifles. Some didn’t work out too well because of our IBAs. I felt like a turtle on his back every time we did sit-ups or modified sit-ups. PT wasn’t as bad as I thought it was going to be because of the circuit though. The sergeants were spread out going from circuit to circuit and didn’t have a lot of time to just yell at us, so I guess it could have been worse (which I think will come tomorrow).

When I got to class today I found out that Charlie company didn’t even have PT this morning. Instead they had a surprise shakedown of the entire company, their rooms, lockers, bags...everything! People had to dump out anything that was in bags, they checked the ceiling tiles, and anywhere else they could think of. I guess they found some alcohol, but that is all I heard. Pretty crazy morning for them.

We spend the first part of class in the lab troubleshooting which I thought was pretty unnecessary. I was hoping to pretty much review all day. We did review for the second half of the day which was good, but it seemed a little rushed. Let’s hope the information sticks in my brain.

We had mandatory training tonight again. PFC Metal, the Hawaiians and myself all thought we were supposed to form up at the company at 16:00. We arrived at 15:45 thinking we were all high speed arriving early, but found out the formation left without us about five minutes prior. So we ended up walking over to the building where the training is at. We thought we may get into trouble, but as we walked in none of the sergeants said anything. We sat down and listened to a dude tell us how important it is to make goals and how exactly we should make them. We then proceeded to make goals and write them down on paper. Luckily the training was only an hour and we were outta there. We formed up and those of us at RBK marched back from the training.

When I got back I jumped on my computer to check and see if my AKO states where I’ll be stationed. There were a few others in our class that found out they were going today, but at some point during the day the site went down. The site is actually down still down now! I can’t believe after all this anticipation, waiting and wondering the information is quite possibly there...only it’s not accessible. Darn! I guess I’ll check back tomorrow.