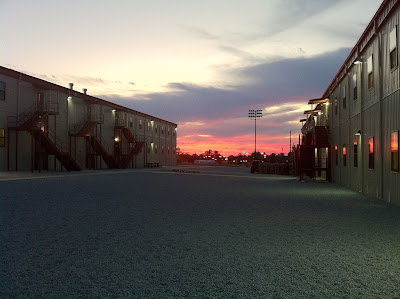 This morning I didn’t have PT, instead I was a battle buddy for PFC Metal at a dentist appointment first thing in the morning. It’s always nice to miss Monday’s PT. It’s always a run and it seems Sergeant Kent is always trying to punish us for having the weekend off by making us run all over Ft. Gordon.

We started a new class today called BCCS. Unlike our last class we actually learned what this stands for...Battle Command Common Services. Not exactly sure how this will play into everything, we have learned the initial setup of the laptops and that is about it for the first day. So far we have had an assistant instructor and the normal instructor teach and they both seem so much better than our previous instructor. This instructor said he will be with us through our last class as well.

After lunch we were reviewing on our own and about 4 people in class fell asleep. Just then a badass sergeant came walking in. He walked right up to PVT Celtic who was fast asleep and yelled “Get Up!!!”. He then proceeded to tell the whole class how important it is to stay awake during your military career no matter how tired you get. Back in the day he realized this when he fell asleep along the DMZ (De-Militarized Zone) in Korea. When he woke up he thought he saw a North Korean standing by a tree. His heart was racing and his blood was pumping. He was instantly awake and wondering what he should do. Eventually they went to the tree and there were no foot prints in the snow around, it was only his subconscious imagination at work. He said it taught him a valuable lesson and he hasn’t fallen asleep on the job since.

The rest of the day after class consisted of eating over at the RFAC and then hanging out at the library. I was able to print out all the paperwork I need for my 4-day pass coming up in November (Veteran’s Day). My wife is flying up (using that free ticket) and I’m looking forward to seeing her again. Use of the computers and printing is free at the library....nice!