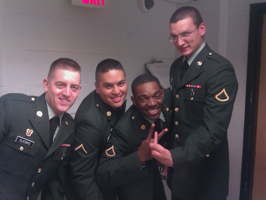 A photo of some of the guys in Charlie who are in a class in front of us.
They had graduation today!! The guy second to the left was one of
my original roommates in Charlie company.

This morning...you guessed it...no PT. Instead me PFC Metal and the young Hawaiian had to go to the medical clinic to get some shots. Our status turned amber on our AKO site showing that we needed some immunization shots. I needed hepatitis A & B. When we arrived we had to sign up on a sheet. A nurse called both me and PFC Metal up at the same time and asked if we had our “packets” filled out. I looked at her with a puzzled look and asked “what packets?”. She started pissing and moaning about how we had to fill out a packet after we sign the sheet. I asked her where I could find one of these packets and she said she was not going to tell me. PFC Metal’s nurse was a little nicer, she brought him out and showed him...then she made an announcement to the room that anyone who didn’t fill out a packet needs to and showed them all where they were. I swear civilians that work for the army are all rude jerks. I have dealt with them since basic and there are so many a-holes out there. PFC Metal grabbed me a “packet” which consisted of two sheets of paper to fill out. I’m not sure how they expect people to just know these things when they come in. After that announcement from PFC Metal’s nurse all the folks in the waiting room came up and grabbed a packet to fill out, so I know it wasn’t just us that didn’t know.

I got the shot and then we took off to school. We were a little late, so we had to check in with the office before heading to class. We had another lab day today. This time we were much more successful setting everything up. Since I arrived late I wasn’t assigned to a specific area, instead I just walked around and helped everyone get everything going. The lab is an interesting place. There are so many places that are semi-dark and the instructor sits at a desk where he can’t really see anyone. There were people asleep everywhere. The funniest was the young Hawaiian who was asleep in a little cubby hole between the wall and one of the work areas totally out of sight from everyone. In each work area I think there was at least one person asleep as well. It was still fun though getting everything up and running in a more realistic environment. We hooked up three routers, 4 switches with two computers connected to each switch. We also had to get a domain setup with exchange server and a file/print server. Since we finished almost all of it before lunch you could walk around and see a lot of solitaire and pinball going on....lol

Tomorrow is review and then we test out on Friday, then I’m done with classes in AIT!! I can’t wait!!