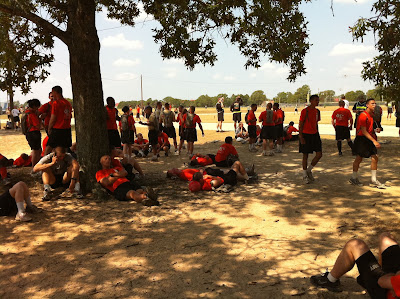 A photo I snapped of a lot of the Charlie company folks just hanging out.
We all had the bright florescent orange company shirts.

Today is the Battalion Organizational Day. It’s a day where each of the companies in the battalion will compete against each other in a number of events. We will have no PT (except for the events themselves) and no school today. A good day indeed!

Wake up this morning was at 5:50 so we were able to sleep in a bit compared to most days here. I had a great breakfast at the RFAC (love our dining facility here at RBK!). We then marched over to a big field were most of the events were taking place. After a little welcoming ceremony the events started. I volunteered to play on the company basketball team, so we all headed off towards the gym. We ended up playing Alpha company (all the MOS-T soldiers). Unfortunately after having the lead the entire time we turned the ball over multiple times and they ended up winning. I didn’t play too much leaving it to the younger guys to duke it out. It was a little strange playing after almost a year off! Fun times though even with the loss.

At lunch time they had some tents out in the event field where a huge line of the entire battalion was waiting. I waited in line for a while, but it didn’t even move. So I asked the young hawaiian if he wanted to walk to the RFAC and eat lunch. We took off and ate lunch at the RFAC which was glorious. Normally we only get to eat breakfast there, so lunch was a real treat...and we were able to eat in air conditioning.

After lunch we all formed up to watch the dance off. Yes each company had a dance team and there was a competition. It was pretty funny too. Charlie came in third place in that event. The last event of the evening involved the NCOs from each company competing in a relay race, but instead of a baton they carried the company guidon (basically a pole with a little flag on the top). 4 NCOs each ran a lap around the track. Charlie was way behind, but made an amazing comeback with our anchor on the last lap. Unfortunately it wasn’t enough to get 1st, but we did place 2nd in the event.

It was freaking hot all day long. I got a sunburn as I’m sure a lot of people did. There were also at least two (that I know of) heat casualties. One was actually an NCO! When there is a heat casualty they wrap them up in ice sheets to cool down their body temperature.

After the announcements and the handing out of the trophies we headed back to our company area for the safety briefing. It was the same stuff as usual except the lead sergeant said he spent some time on Facebook this last week looking up soldier’s profiles. He said they really need to change their privacy settings. If he can see some of the stuff they say so can the bad guys. Plus if they are underage and there are photos of them drinking that could get them into trouble. Also if you make bad remarks about company sergeants by name...you may want to change your security settings....D’oh!!

We were released early for the weekend...woohoo!! We headed back to RBK and ate dinner at the RFAC...for the first time ever I ate all three meals at the RFAC. A good day indeed!


A video I took from my iPhone (so it's a bit shaky) of the dance off competition.
The first portion is Bravo's dance team and the second is the Charlie team.