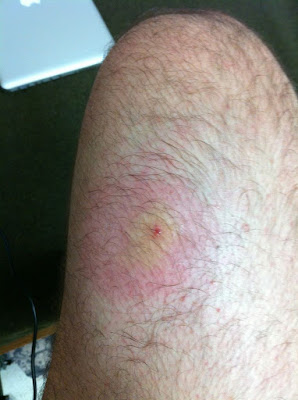 A photo of the spider bite on my hairy leg


Last night was another night of little sleep. The new roommates are noisy, which keeps me up because I’ve turned into a light sleeper ever since joining the army. The quality of life here at RBK can really take a turn for the worse just by a few changes in roommates. Our last roommates always made sure everything was quite at lights out. Life here already sucks enough, but when you add interrupted sleep every night it can get even worse. I can’t wait for the day when I can live in my own place again with my family.

This morning we did ninja PT complete with the famous “power skip”. It was not too difficult, which was nice because of the lack of sleep I will take an easier day of PT if I can get it.

During class today one of the students asked the instructor if he knew who Mr. Bean was. The instructor said “stop right there....I’ve heard it before”. (Our instructor actually looks like Mr. Bean....lol)

After a break we all came back to class except for PFC Metal. I was looking around and he was nowhere to be found. Class started and the instructor didn’t seem to notice. I was thinking for sure that he fell asleep on the toilet during the break (it happens). About 10 minutes after the class has started he comes in and sits down. Luckily he didn’t get into any trouble. I asked him later what the heck happened and he said it was only a nose bleed, but he couldn’t get it to stop.

I somehow got a spider bite on my leg at some point recently. It itches like crazy and I have to do everything in my power not to scratch the darn thing. I hate spiders, so it kind of freaks me out to know that I had one crawling on me and biting me. Grrrrrr.

At one of our formations today our platoon sergeant stated that the Lt. Colonel has now made it officially against policy to smoke “spice”. I’m not entirely sure what the heck it is, but evidently it’s legal to purchase at some smoke shops off post and it can give you a high. If anyone gets caught smoking the stuff they will get an article 15 and perhaps even more trouble.

We didn’t have mandatory study hall tonight, which I was a little upset about. We have a test coming up this Thursday and I feel we need every minute we can to get ready for it. Instead we have to go to mandatory company training. Our training was basically watching a movie. Suicide rates have been high in the army and they are trying to do everything they can to help soldiers keep an eye out for others who may be having suicidal thoughts. We were told that this movie is going to be shown to everyone in the army whether they are overseas or in the US. We were also warned that it is shown from a christian point of view, it even talks about getting saved and how God has a plan for your life. So anyone who felt uncomfortable with this had the opportunity to go downstairs for some alternate unchristian ways to help prevent suicide. I don’t know if anyone actually took this opportunity to leave or not, I was about half way back in the seats and I didn’t see anyone leave. I was bummed to hear that the movie was about 2 hours long, so I would not have any time to study tonight.

The movie was called “To Save A Life” and was actually not that bad. The quality seemed more like a Nickelodeon or Disney TV show. It was about a kid who’s best childhood friend kills himself and how it affects him even though they have not been friends for a while. He goes through a a lot of emotions, his girlfriend leaves him, his parents also break up...I was starting to think that this kid was going to kill himself too. Everything turns out OK and you leave the movie with the knowledge that you should always pay attention to how you treat others because you never know what kind of crap they are going through in their lives.