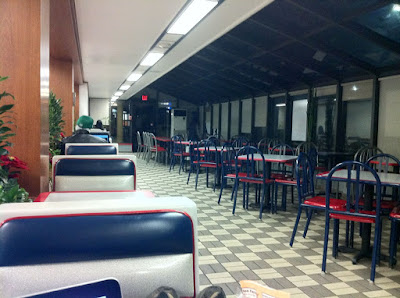 This morning I gave my body a rest and didn't work out since I did both Saturday and Sunday. I woke up and of course had my morning Starbucks with a bagel that I brought from my barracks. (Gotta save that money). I was able to Skype with my wife which is always nice. I may get frustrated with the program at times because if the network is busy the calls can drop and at times the voices can be delayed. It is awesome though for what it is. We can use it to talk to each other for free anywhere we have an internet connection. There are folks here who purchased Korean cell phones. They are paying $90 a month plus whatever the cost of the cell phone (anywhere from $100 - $200). They will not be able to use the cell phone when they leave the country. So being able to talk for free is nice, even if it has some minor complications.

When I arrived to work this morning all focus was on the upcoming holiday potluck. We had to move tables upstairs and get the conference room ready for a little awards ceremony that was going to go on before the potluck. Even though my job is a 25B (Information Technology Specialist) I haven't really even touched a computer since I've been here. I feel more like an office gopher than an I.T. guy. I'm not really complaining though because I've been working with computers for the last 15 years. It's kind of nice for a change to do something else. I do hope though that my next assignment is actually working on and fixing computers…or something to that effect.

During the award ceremony a few of us stayed in the command center for the conference room. (This is actually why my position is a 25B position. The command center has a few computers and a lot of audio/visual equipment). We stayed in there to make sure there were no technical difficulties. We found out that our door won 2nd place in the holiday door decorating contest. The command center is nice because if everything is running smoothly you can sit there and watch TV. When it was time to eat, all the officers got up and went through the line. Not being in the "real" army yet I thought this was normal procedure, but SPC Short got totally pissed off. He said in the normal army the junior enlisted always eat first. I think what made it worse is that all the food that was brought in was by the enlisted folks and not the officers (for the most part). It turned out fine though because there was plenty of food. I ate everything from pizza to turkey with mashed potatoes to some authentic Korean dish which was very tasty…just don't ask me what it was.

We then had to clean everything up and take the tables back down stairs. The rest of the day was very slow. So slow in fact that I didn't do much of anything. I was able to program all my co-worker's numbers in my issued cell phone. The only problem is that even though I've selected English as the language, there are still a number of items that come up in Korean. So I only use it to it's basic level.

A strange thing that seems to happen quite a bit is that I get saluted a lot by ROK soldiers inside the building. (The ROK soldiers salute each other inside or outside where U.S. soldiers only salute outside). Maybe they are saluting me because I'm old, because it's definitely not my rank. It could also be that they have the same issues I'm having in that I don't know their rank structure very well yet. Since there are also air force, marines, and navy here I just salute anyone that has anything shiny on them and that seems to work.

Tomorrow we are having gym PT as a unit at 5:30 AM. I think our sergeant wants to make sure the two specialists pass their PT test this time around.