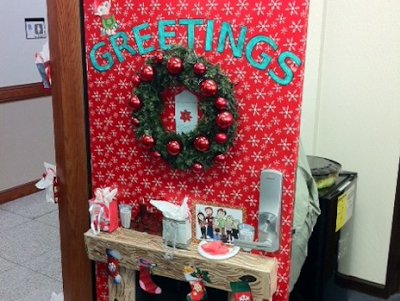 Our office door at work...I used some of my arts and crafts
skills to put on the finishing touches...my first job at my new post

Today I woke up with plenty of time to get ready at a leisurely pace. I then walked over to the food court and purchased a coffee from Starbucks and talked with my wife via Skype. So far the morning has been good, but I have to say the thought of going into work today almost made me throw up. I have been nervous as hell doing this job with all the brass around. It doesn't help either that I'm the only 25B (IT Specialist) there. That means no collaborating or backup for me.

I arrived to work 20 minutes early (don't want to be late and leave a bad impression). The day went much better than yesterday. We spent most of it doing in-processing. We walked from spot to spot on my checklist and had the people sign off on it. I was input in systems and I received gear. By the time I got back to the office I had my arms full of gear and paperwork. I was shown around where I will actually be working and what my responsibilities will be. My first task today was some arts and crafts! I helped decorate the office door for a Christmas contest. LOL.

I also had to read and sign a statement that said I cannot let out secret information or compromise any operations that are going on. This means I'll have to be careful about what kind of stuff I post here. I had planned on telling all about my job and what exactly a 25B does in the real army, but at least with this job at this post I may have to limit it to my feelings and more general things that are going on.

I had my initial counseling session with my NCO today. He is a sergeant (E5) and is a very cool guy. Really wants his soldiers to succeed and sounds like he'll do anything to help them do so. I think this guy will be a great guy to work for! He did however have to give us all some "corrective training" today. The specialist that was walking around with me showing me all the places to go, missed a very important meeting. There was a general involved so our sergeant was pretty much required to take some action. Since we are a team we all had to go out and do some push-ups as well as some marching around in circles (well squares really) for a while. Not too bad though really.

Speaking of push-ups I found out today that we are pretty much responsible for doing our own PT in this unit. This is great, I've always wanted to do my own instead of some of the stupid army PT that I've had to do in the past. I just have to make sure I'm responsible and do it each morning. One of our specialists said he hasn't done any in 2 months. He also failed his last PT test, so now the sergeant was on him a little more today. I haven't done much at all since leaving AIT, so I need to get back in action. I plan to do so tomorrow morning!

I went back to my room after work today and found my roommate was gone. He had completely moved out! I wonder if I snored or something. He seemed like a really nice guy and I thought we were going to get along great. (He was really quite which was perfect for me!) Well that means for now I'll have the room to myself…no complaints about that!