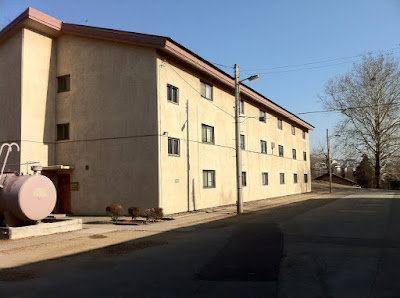 A view outside of the barracks that I live in

Last night I watched "Repo Men". I wasn't expecting much from the movie except some action. The plot was a bit unbelievable…repo men taking back artificial body parts from people who couldn't afford to pay for them any more, then one of the repo men gets an artificial heart and he ends up on the repo list. Despite that it was entertaining enough to keep me watching and then at the end of the movie my jaw dropped. I couldn't believe the twist they threw in there. I won't ruin it for anyone, but seriously my mouth was wide open.

Speaking of movies, computers, and the internet I've come across a huge problem when living in another country. Back in the states there are plenty of options to view video content for free, or if you choose to subscribe to Netflix you can watch a number of movies over the internet. Since I'm now overseas I have found that none of these options work anymore. Hulu, the network sites such as CBS, even Netflix which I have a paid membership, will not let me stream movies or TV shows over the internet. They all state that streaming is only available in the United States. WTF? I'm on a freakin' US military installation! All they are doing is forcing everyone to use alternative means to obtain shows and movies. Believe me there is no limit to the amount of shows and movies that get downloaded over here. It just sucks that there is no legal alternative that I have been able to find yet. That is not going to stop me from watching my favorite shows though…I'm just a week or so behind everyone else.

Back to work talk…today was pretty slow, well that might be an exaggeration…it was totally dead! I forgot to bring my iPhone to work, so I couldn't play any games. The entire time I was at work all I did was sit in a chair. I read the Stars & Stripes newspaper…every single story in the paper! The other guys were on the computer double checking work calendars for meetings and the occasional Facebook status check. I still do not have access to computers yet…pretty funny because I'm a 25B, an Information Technology Specialist who does not have access to the network yet. My sergeant did send me down to admin to check on everything. When I did the master sergeant down there is still convinced that she's going to have me move down there and switch positions with a sergeant that is currently on emergency leave. I don't know if it's just wishful thinking, or if there is any truth to it. She does seem pretty serious though. If I did move to the admin side I think I would do a lot more computer work and less of the stuff I do now. Which brings me back to the only job I did actually do today for our office. The KATUSA took me up to the conference room and showed me how to shampoo the rug. Exciting times we had, me and the KATUSA cleaning the entire conference room. I really was glad to be doing something other than sitting in a chair out of news to read. I was pretty amazed at how dirty and how black the dirty water was each time we changed the water out. I guess people have a lot of dirt on their feet coming in there.

We were off at noon again today and actually off for the rest of the week for the Christmas holiday. I walked back to the barracks and had a couple of PB&J sandwiches, then headed off to the gym for a little PT. This time we didn't really play basketball. I worked out a little on my core and my arms, then we played some 3 on 3 with some young Koreans that were there. They were not very good, so I just stayed in the key and blocked any of their shots if they dared get too close.

I was able to video chat with my wife and kids, then a little Rosetta Stone and some shows before bed. Sleeping in tomorrow, my roommate has left for the 4 day already. I'm looking forward to having the room to myself.