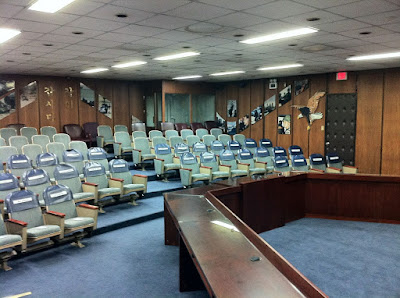 A view of the conference room we are in charge of.
VIPs sit at the table, while the rest get the seats in the back.

Last night my KATUSA roommate came back and was asking me if I had an internet connection in the room. I told him no, but I had thought about getting one if I could split the cost with someone. I've heard that our only option for internet is $60 a month. He said he thought there were cheaper options, but that guys in the Korean army during their two year mandatory time in service they don't make much money. In fact they barely make anything. He is what is equivalent to the same rank as me (a PFC), yet he only makes about $70 a month. Holy Cow!! OMG!! Crap!! and all those other words of surprise!! I had no idea that they didn't make hardly anything. They do get a room and they do get to eat at the DFAC, but other than that they don't get much of anything. He said it's because it's mandatory that they don't have to pay hardly anything. I'm still in a little shock. I don't think I could ask him to give me half his monthly paycheck for internet. KATUSAs aren't allowed to have electronics (i.e. cell phones or laptops), but I think all of them do. I'm not sure how much they enforce that rule, or how much trouble they get in if they get caught.

This morning I woke up at 5:10AM to make sure I got up and got to the gym by 5:30AM. Our gym PT was a bit unique as far as my limited experience in the army goes. We started off putting on some boxing gloves and hitting the heavy bag. We would punch for a minute, then rest…another minute with rest and then finally a two minute session. I never knew how quickly you can get tired just by punching a bag. I think it may be good stress relief too. I also learned something new this time to the gym. They do have treadmills, they are just located upstairs which I didn't know existed until today. We then moved down to the basketball court next to the bleachers and did 4 sets of 25 dips and then some elevated push-ups. We moved into the weight room and did some training on our own. Finally we came out and sat on the wall just like I used to do back in junior high P.E. My legs still burned just the same. All in all it was a pretty good work-out.

Once I arrived to work this morning, we had to get everything setup for a meeting. Once we were all setup and I was about to leave, I was told I needed to help out in a little award ceremony they were going to have at the beginning of the meeting. So I ended up having to stand in front of everyone holding a framed scroll with a couple of coins in it until the 4 star general was ready to hand it to the awardee. At that point I handed it to the general and my work there was done.

We cleaned up after the meeting and setup for another one that was going on later. I then broke down and decided to get the internet in my barracks. I hate having to pay for this expensive internet here, but I think with school coming up soon and having a constantly available quality connection to use with Skype will be much better. I will also have more time if I don't have to walk back and forth to the food court each time I wanna use the Internet. Unlike back at Fort Gordon where there was a wireless network we could just join and pay for in the barracks, we have to sign up and have the internet installed in our rooms here. Very similar to what a person has to go through when they order the internet for their house. I made my appointment during lunchtime tomorrow.

My next stop was to the PX where I bought some speakers and a wireless router for my future internet. This will allow my KATUSA roommate to use the internet as well, I just have to figure out a good price for him to pay me. I wonder if he can bring me some Korean food from home when he has weekend passes??

When we arrived back to work it was pretty slow for the rest of the day. We were told that we all had to bring our gas masks tomorrow. I guess we're having a drill or something. Reminds me of the good ol' days in basic when the drill sergeants would throw CS gas in our formation. I wonder if there will be any CS gas tomorrow…hmmmmmm.