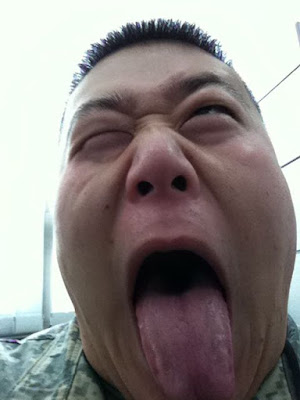 Today was a a little different than normal days so far. I woke up at 4:15 AM to hurry up and leave for work by 4:45 AM. There was an early meeting to get setup for. After we were all done getting it setup, I was told we were to go back and get changed into civilian PT clothes to cheer SPC Short and SPC Roy on for their PT tests. Our sergeant scheduled a special PT test for both of them since they failed their previous test. He had to pull a couple favors to get an E-7 sergeant from the company to come grade them.

As I was on my way out of the office it was still dusk. I saw a soldier walking towards me. There is about a 90% chance here that he would be an officer so I stared at him intently and got my hand ready at my side. I saw him doing the same. We kept walking closer and closer. It looked like a scene from an old western movie where the two cowboys are getting ready to draw their guns and shoot. At about 6 paces I still could not see his actual rank, so to be safe I started to salute. The soldier coming towards me did the same. Both of us were in a half salute when he recognized that I was just a private....and I saw that he was a staff sergeant. We both laughed and kept walking.

We met in front of the gym and after waiting a bit, there was no SPC Roy. He ended up calling the sergeant and stated he just woke up...bad news for him. We went ahead with the PT test for SPC Short. He did fine on the push-ups and sit-ups, but unfortunately failed the run. For our two mile run test we run on the road around a baseball field for 4 laps. I didn’t actually run with them because I didn’t bring my road vest (I thought we were staying in the gym). We were all finished we were waiting for SPC Roy. The sergeant had told him earlier to meet us where we were doing the run test. He also told him to be in full battle rattle with his helmet, body armor, his rucksack filled with 50 lbs of gear, and two duffle bags filled with 50 lbs of gear each. It took him a while to get there, I guess because he had to pack all that crap. This whole time we had to stand outside and wait for him. I was starting to get cold. I thought we were just going to be in the gym, so I didn’t have a hat and only had shorts and a sweater on.

He finally arrived and instead of letting us go, the sergeant had to chew SPC Roy out for what seemed like an eternity. SPC Roy then had to stand in front of our small formation and apologize. Finally me and our KATUSA were allowed to sit in the car while the sergeant chewed him out some more with the rest of the E-4s. We finally all headed back to get changed and go back to work. SPC Roy had to go to work with all his gear and in full battle rattle. While in the office everyone that came in did a double take because there is SPC Roy doing his desk job in full battle rattle. It was actually a little funny watching this all take place...not funny that SPC Roy had to work in full battle rattle, but all the people’s looks and such.

Today I did not even touch a computer once again. Instead I had the privilege of helping our KATUSA and SPC Short clean the office. I guess we’ll be doing this the whole short week of half days. I used pledge on all the wood and Windex on the glass and windows. Tomorrow I hear I get to learn how to shampoo the carpet, I’m so excited...I just can’t hide it!

We all had to go to the gym after work, which we got off at noon as planned...surprisingly. Our PT today was basketball. We played along with some other folks from our building against another unit that happened to be in the gym already. We then just played anyone that came along. It was an awesome workout and we won all our games, but I think I overdid it. Not only was I physically exhausted, but (warning...I’m going to talk about my private area here) I was wearing boxers. I didn’t think much of it because when playing half court one-on-one with the sergeant everything was fine. Now running up and down the court playing full court basketball something horrible happened. At first everything was fine, but during the second hour of playing my balls were chafing against my legs. It got so bad I could barely run up and down the court. It felt like someone was rubbing sandpaper on my balls with each stride. Next time I’ll have to make sure everything is more secure by wearing my tan tighties they issued in basic. I could barely walk when we finished. I got back to my barracks and nearly passed out from near exhaustion.

After I ate a late lunch and showered I was able to video chat with my wife, kids and extended family. They decided to open Christmas presents early since they were all together. (The kids will be with their mom for this Christmas). I was able to watch them all open presents and talk with everyone via video chat. Sometimes technology is so awesome. It was so nice to see everyone, but it also makes me so homesick. I miss everyone so much. Video chatting is like giving a meat eater some tofu...it may satisfy them, but it will never fill that desire to bite into a nice juicy steak.