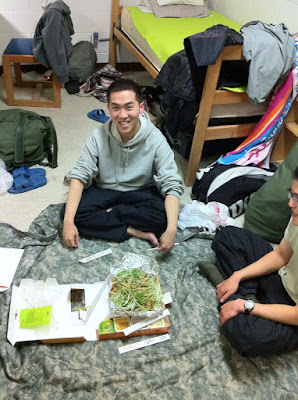 Last night my KATUSA roommate took me up on the internet for food offer. He ordered some Korean food and had it delivered. I enjoyed some chicken with some great seasoning with vegetables and side dishes as well. It was delicious. It’s making my mouth water just thinking about it as I write this.

As we were sitting on the floor of our room eating we discussed more about being a KATUSA. I found out that even though they make the same amount of money as their counterparts in the ROK army, they do get a lot of benefits and amenities that the regular soldiers do not get. Staying in this room with me for instance is one of them. The ROK soldiers barracks have 12 or so to a room and they share showers and bathrooms much like we had to in basic, only they have to for the entire two years they are in. The KATUSAs also get to go home each weekend on leave while their counterparts have to stay. So in a lot of ways they are the lucky ones.

This morning when I got to work I ended up holding a door for all the officers coming to a meeting. Each time an officer would come near I would have to stand at attention and after they passed I would go back to parade rest. Funny the things I find that I’m doing now as a 25B...I am now a doorman...lol

A little later on in the day I did my actual job for the position I’m filling. It’s a pretty simple job just making sure everything runs smoothly. I just need to figure out any of the troubleshooting steps for the times when something goes wrong.

I took a break at lunch and headed back to my barracks for the internet to get installed. The guys came right on time and had it up and running in a few minutes. Right after they left I had my wireless router up and running in a couple of minutes. We are now good to go...I called my wife via Skype and it was so nice to be able to talk to her without all the background noise. I think I’ll be getting my money out of this after all.

Today was “bring your gas mask to work day”. At 14:00 we heard a siren go off and at that time we had to strap on our equipment. This is basically a bag that has our gas mask in it. We wear it on our hips. We had to keep it on our hip for about 20 minutes. During this time we didn’t have to take it out or anything...we just had to wear it. Not sure what this accomplished, but I did it and it’s done.

I then headed out to CIF finally to pick up my gear that the base will be issuing me. Luckily I had Special K and SPC Roy drive me there and help me out. I was issued a whole crapload of equipment. In addition to the cold weather gear I’ve been waiting for, I also got everything from body armor to a rucksack. Pretty much everything I had in basic and then some! Once they gave it all to me we dumped it all out to make sure I had everything that was on their list. We do this because when it is time to leave and you return everything, you will have to pay for anything that you do not return. So it is very important to make sure the list of what they say they gave you matches what they actually did give you.

When we left all three of us had our hands full carrying everything I was issued. We stopped by my barracks to drop it all off before heading back to work. We got back just in time for our sergeant to say he wanted to bond with us all a bit, so it was off to The Navy Club for a couple of drinks. I work with some great guys who go out of their way to help out the team. Even though the actual job isn’t exactly what I expected, I’m glad I have the co-workers that I do.