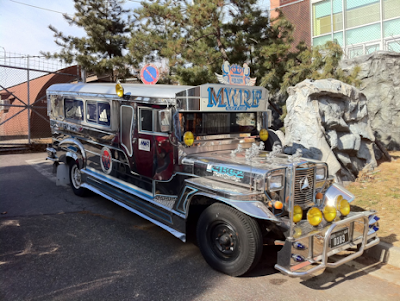 The pimped out bus in front of “The Navy Club”

Saturday morning was great. I was still alone in my room, even though the new roommate moved some of his stuff in he did not sleep here the night before. I slept in and woke up about 9:00 AM. I then went to my neighborhood Starbucks and grabbed a coffee and a bagel for breakfast before meeting my sergeant and SPC Short at the gym. Since SPC Short failed his last PT test, this "extra" PT was mandatory for him and since we are a team I had to come too. I rode a bicycle for about 45 minutes. When I got off I almost fell because my legs felt like jello. I guess they were on auto-pilot when I was on it. After resting for about 15 minutes the sergeant wanted to play some one on one in basketball. I would love to say I kicked his butt…I guess I'm a little out of shape and I haven't played in a long time. I won the first game (12-9), then he wanted to make it two out of three. He barely beat me (11-12) the second game and then beat me again in the third (10-12). I was totally gassed. A great workout though!

I then showered and had lunch in the food court where I talked to my wife via Skype. Had to take a little shopping trip at the PX to pick up some supplies. I'd like to get more food and such, so I don't spend as much going out to eat every day. I am not having the money taken out of my paycheck like most of the guys on base for eating at the DFAC which is good. Because of the various hours and duties of my job I can't make it to the DFAC all the time, so I got a waiver. Now I just have to be smart about how I spend my money. I bought a small coffee pot to brew my own coffee (now I just need coffee and a cup). I also bought some pop tarts to eat in the morning instead of bagels at Starbucks.

The rest of the day consisted of laundry and watching movies on my laptop.

Sunday morning…revenge is sweet. I went to the gym in the morning again, except this time we made it earlier because of the UFC fight that will be on later in the afternoon. I worked out my abs and chest, then our sergeant wanted to play basketball again. This time I beat him 12-4 and 12-6. I thought..this is going to be a good day!

After taking a shower I made my way to "The Navy Club". It's a restaurant with a bar and I was told they have a number of TVs that show AFN sports. It's actually pretty close to my barracks which is nice. I made my way in, sat down and ordered some food. I was a little early so I didn't think much when they had boxing on the TVs. After I finished my meal I asked them if they were going to turn the channel to the fight. The waitress went back and checked with the manager. To my surprise the manager actually came out and spoke with me. He said he is a huge UFC fan, but unfortunately they can't show the fights at the Navy Club because it's too violent. Are you kidding me? They have boxing on the TVs now, but UFC is too violent. We are in the military, we are all trained killers. I left in search of some place on post that had the fight on, but after checking every place I know...I was out of luck. That really sucks! I've seen commercial after commercial promoting the fight on AFN Sports all week and now I can't even watch it.

I ended up just walking to the commissary which has to be about 5 miles round trip. I picked up some supplies so I don't have to purchase fast food every time I need to eat. I had to make my shopping light though because I knew I had to carry every thing I purchased back to my room. I also had to get some dinner rolls which I was volunteered to bring to a holiday potluck tomorrow.

I then made my way to the food court to make use of their WiFi. I was able to talk to my wife which is always a treat. The rest of the night will consist of more movies and shows on my laptop and then hopefully going to bed early because I'm beat.

Email ThisBlogThis!Share to TwitterShare to FacebookShare to Pinterest
Labels: 25B, Army, Basketball, Korea