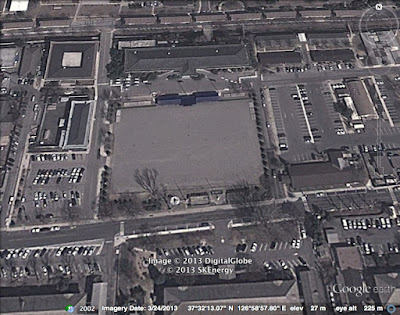 A view from "Google Earch" of where I work. The big parade
field (in the middle) is Knight Field and the building behind is the building I work in.

Today I woke up and did my PT in my room. I did a bunch of push-ups and sit-ups. My plan is to do that on Tue & Thurs then run on Mon, Wed, & Fri. I was able to make it to the food court after getting ready and chat with my wife for a bit too via Skype.

I went to work and did a lot of waiting around today. The morning started off waiting near a conference room for a general to arrive. He was almost an hour and a half late. There were colonels, majors and all sorts of other brass just hanging around waiting. When you're a general though, people have to wait on you.

I then was shown more about the equipment I'll be responsible for. I was shown how to turn it all on and gave it try one time before we had to go. There is a lot of stuff, but I think once I get the hang of it that it won't be too difficult.

A young Korean KATUSA (the ones who are in ACUs and help out the army) had a birthday today. Me and the two specialists I work with ran around the base getting him a card and a gift certificate that some of the officers in our office put some cash in for. During our trip we ate lunch at a little Korean cafe on base. I was finally able to try some of this food I've been hearing all about. I ordered some sort of spicy pork and rice dish. I also sampled from a number of items one of the Korean specialists ordered. Everything was pretty good…and yes I did try kimchi and it wasn't bad.

Once we got back we had a little birthday celebration, after having to do 22 push-ups (his age) the young KATUSA was then taken outside and given a beating. I guess this is how it's done in Korea…lol. We didn't really beat him but all of us lined up and gave him a number of fake or soft punches. He was then told he could leave for the day (after he took the garbage out…lol)

The rest of us had to do a little more drill and ceremony. This was more of the corrective training from the incident a couple of days ago. We have had to go outside each day and do a bunch of marching around in this field. Today was a little different though. Out of the blue the sergeant told me to post (get in front of the group) and then lead everyone around. It seems pretty easy to do when you are just the one following the orders, but it's a bit tougher when you are the one calling the orders. You have to call things at certain times and be in the right place the whole time. After messing up a bit at first, I got the hang of it and was able to have my group do the basic movements.

I went to get a special ID card today that will be in addition to the additional one I had to get in order to get into the building I work in. I had to go with a navy gal over to another building and we arrived there only to find out that their special ID card making machine was broken…try again tomorrow. I guess I'll be heading back there tomorrow, but this time we'll call first to see if it's fixed.

An exciting day in my new life as a soldier in Korea. Now I'm at the food court using the free WiFi. Unfortunately there were so many people here that I was never able to make and keep a call going with my wife via Skype. That was frustrating. I guess we'll just try again tomorrow morning.

That's all for now…over and out

Email ThisBlogThis!Share to TwitterShare to FacebookShare to Pinterest
Labels: 25B, Army, KATUSA, Korea